The sun was just about to peak through the clouds when we arrived at Copicut Farms’ rolling acres of farmland. All smiles, Elizabeth Frary came out to great us. With her flannel leading the way, she took us through a wooden gate and we couldn’t help but smile at Lucy…the dog that is. Excited to see new faces, Lucy’s tail wagged and her butt wiggled with excitement, coating us with rushed kisses and happy dancing as she followed us around. 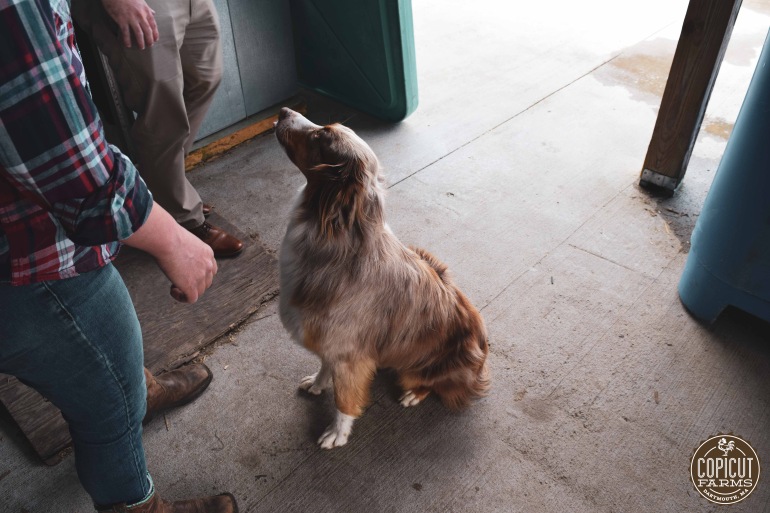 It was hard to tell whether Lucy or Elizabeth was the tour guide, as our human guide showed us the cooler all the eggs were sitting in from being freshly washed just this morning. 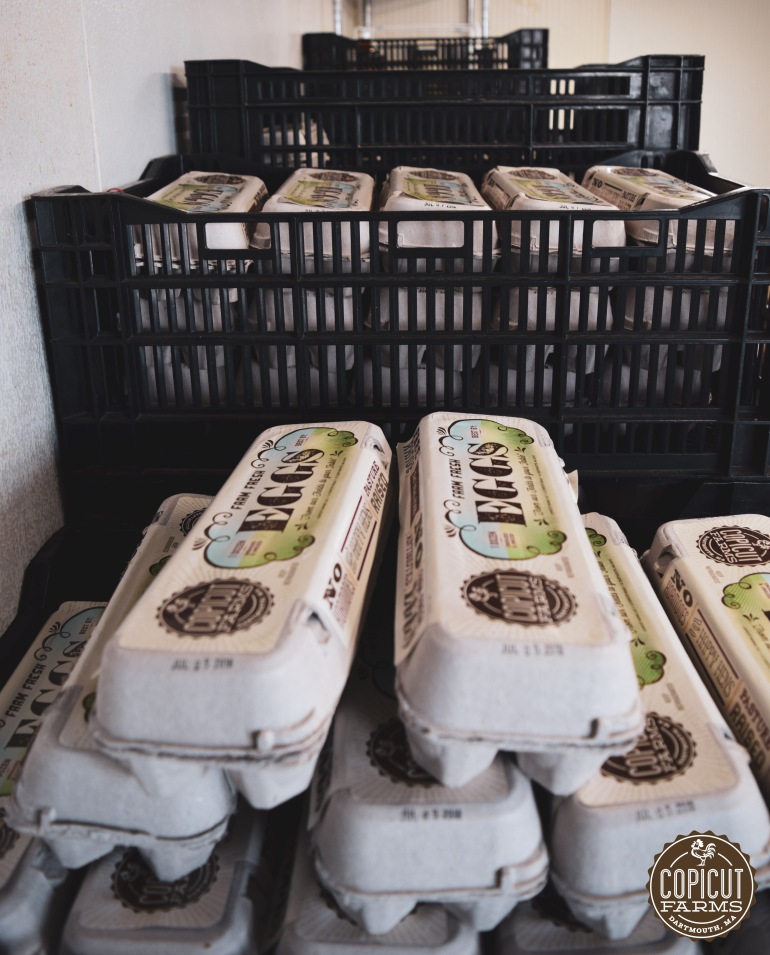 The slaughterhouse crew was cleaning up when we walked by, and they offered us genuine hellos and smiles as we walked in to check out their state-of-the-art processing facility, and Elizabeth beamed as she talked to us about their broiler slaughterhouse, which was created by her husband and herself.

She explains that the chickens are killed in the most humanely possible way that they could find, and said preparing the chickens was one of her favorite parts of the week because “it’s really a time where the farm staff can talk to each other about life and everything else, it feels like a kitchen in here!”

They prepare the food while chatting about their week, and have gotten the process time down to minutes. Elizabeth is hands-on in all operations, this facility is truly her pride and joy. She explains that she likes knowing how her chickens are being handled from start to finish, and it’s the real highlight of the farm simply because no farms in the area are able to process their own chickens.

After our facility tour, we were guided to the broiler coops, where big barn doors were always open for fresh air and circulation. The chickens were a bit wary of us humans, but tentatively checked us out as we stood in the doorway. Elizabeth talked to us about how her chickens were raised, and how they were cared for with love and affection. They had constant water and feed, and were happy to run around their pens. You can tell by her animated talking that she truly loves her job, cares for these animals, and is not afraid to show us any part of the operation we wanted to see. 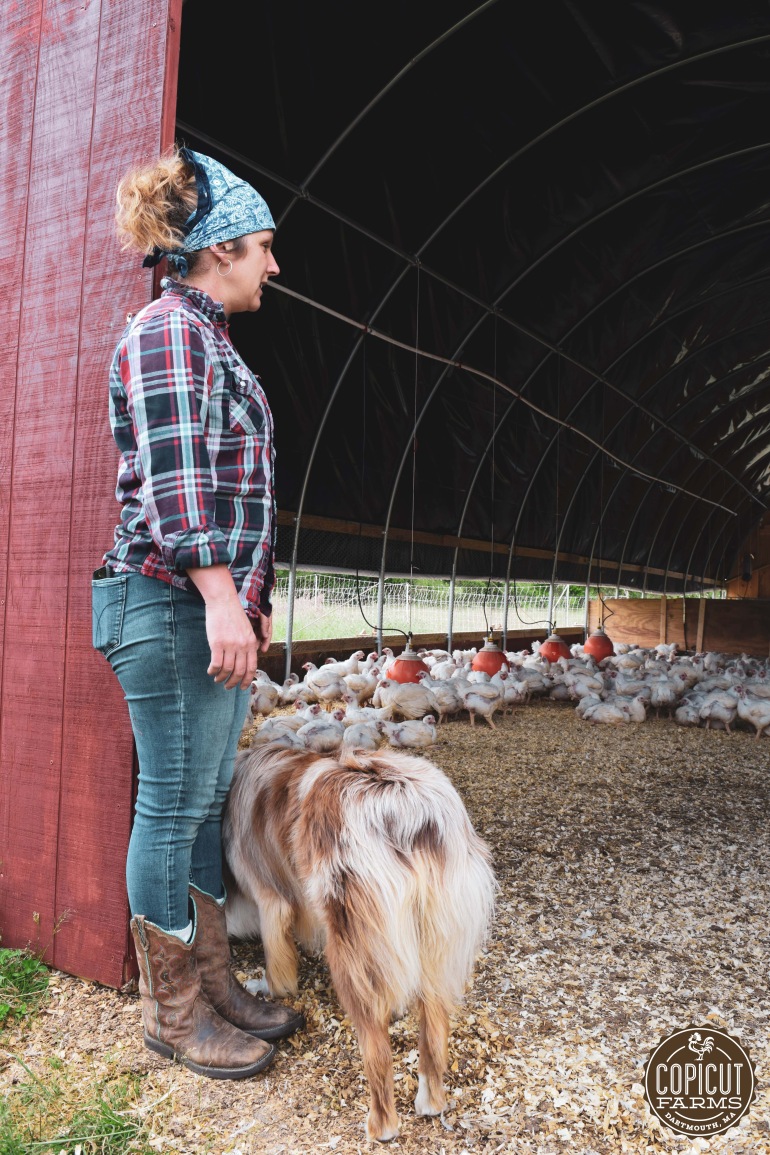 Next stop, the sheep pen. As we are walking, Elizabeth turns her head around, “if I call out her name, she’s going to come running over, she knows her name now”, and sure enough the name Gwen was answered by the quiet bleating of a sheep. Gwen weaved her way through the grass in her pen over to Elizabeth, who had just hopped the fence to say hello to the other sheep. She hoisted Gwen up over the fence so we could meet her, and what an angel she was. She munched on the new grass in front of her, and patiently waited for her adopted mom to return over the fence so she could follow us around. 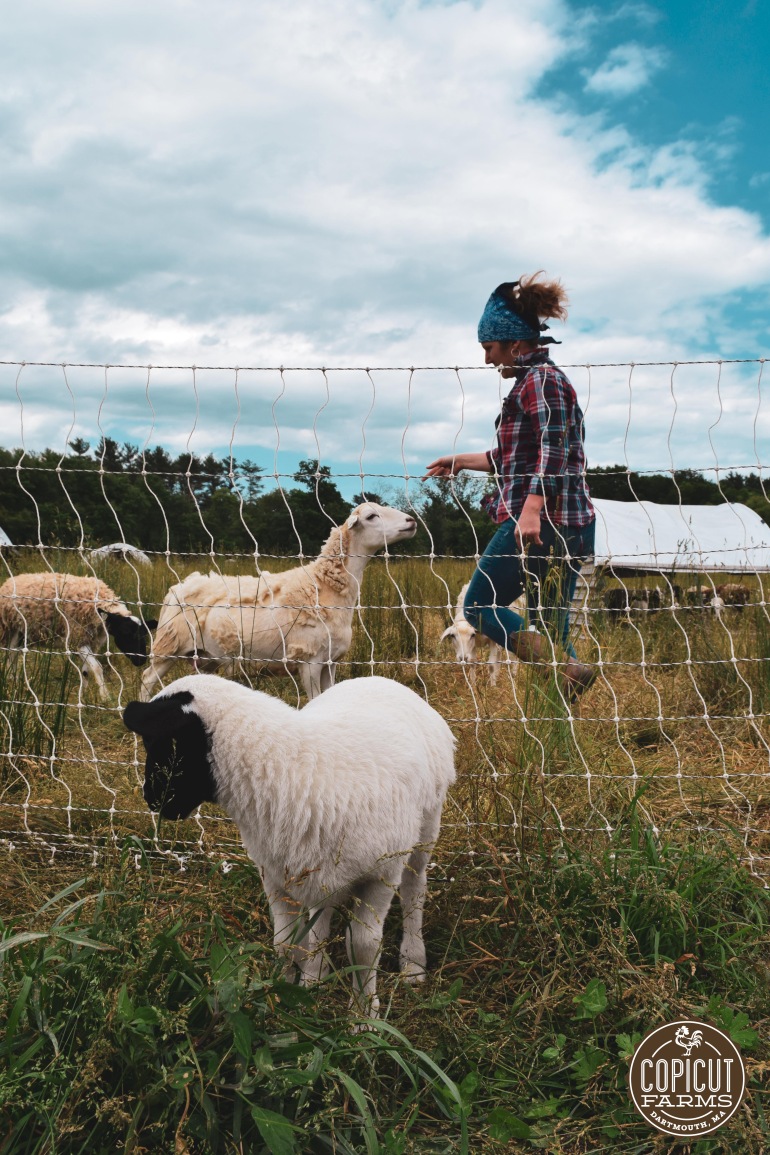 The second our canine tour guide Lucy saw Gwen, her tail wagged and she galloped over, playfully nipping at Gwen’s legs as they chased each other around in circles. They are old friends who are meeting again, and if you didn’t know better, you would think they are two dogs just having fun. They played this game where Gwen stopped short, as if frozen, until Lucy got close enough and then would suddenly run away. It was a careful dance that seemed to have been rehearsed many times before.

Elizabeth led us over to the pig pen, Gwen and Lucy tight at her heels. The pigs were excited to see us, and Lucy as well. Lucy took off running around the perimeter of the pen as fast as she could, and the pigs started chasing each other around and playing. They clearly recognized each other, and were interacting between the fence. Elizabeth pointed at one particularly stout little pig, “that one’s my favorite” she chuckled, watching him do a little prance before running around with his friends.

She proudly explains that her pigs are trained by just a small electric fence that lays low to the ground. They don’t stay in this smaller fenced area for long, “they are only babies who are learning to stay away from the wire before they go to pasture” she remarks. Once they are trained, the pigs will be able to fun free in the pastures without a physical wooden fence, because they will have learned how to stay between the expansive wired area. She mentions that the pigs will sometimes sleep in the woods, until Lucy herds them back in, “they love to sleep late” she says smiling, before walking us over to another area of the farm. 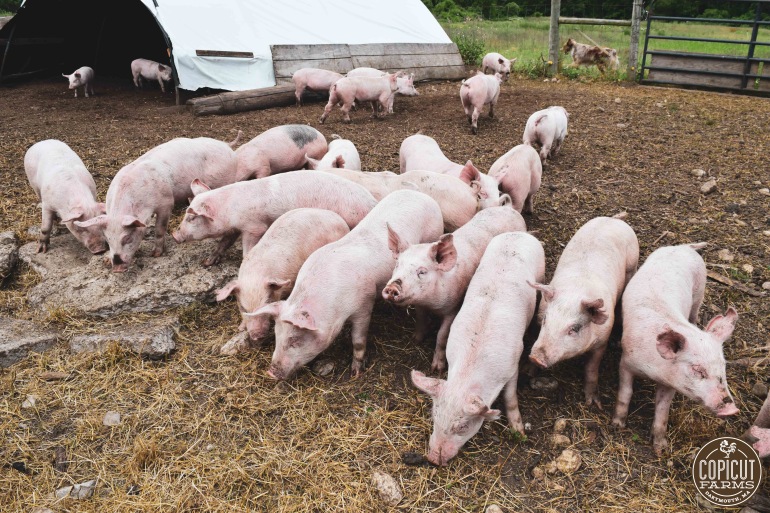 Gwen, the ever loyal pet, stays with our group. She tends to fall behind a bit if we walk too fast, but once Elizabeth calls her name again Gwen gallops up to her side.

This time, we had to trek through tall grass, which Gwen expertly weaved through to get to the open pasture where the egg-laying hens were roaming. Their clucking could be heard before they were seen, as most were huddled inside the coop taking a snooze, but woke up once we approached.

Elizabeth picked up one of the hens to tell us more about them, and the hen just quietly observed us as we observed her. As we stood there, the hens got more and more curious, until they were standing right under our feet, checking us out. 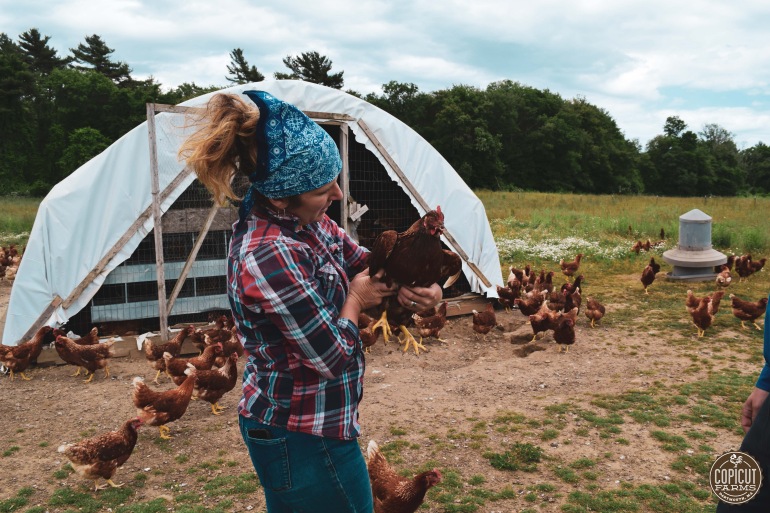 Our Dairy Manager, Ryan, chatted to Elizabeth about her husband and her life. You could tell they knew a lot about each other. Elizabeth told him about a time just recently when she came outside to find many of her hens dead, which she guessed had been from a coyote that decided it wanted a midnight snack. She was emotional when she talked about the accident, sadness tinged into her voice. 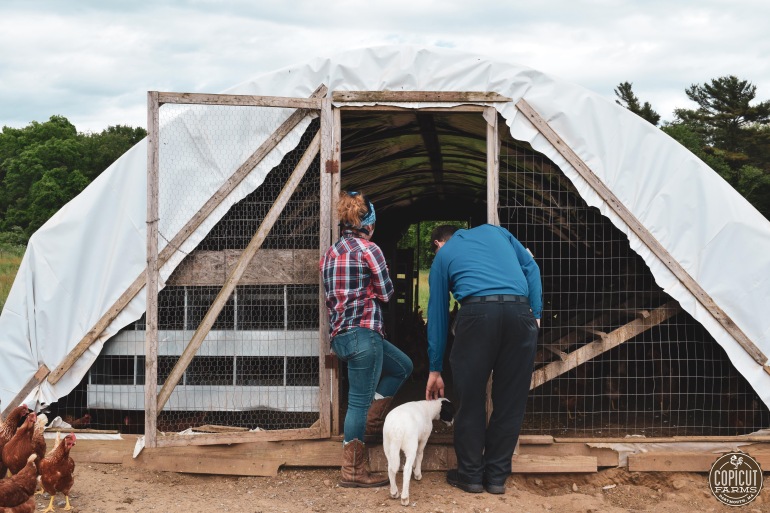 Gwen had a great time checking out the chickens, her quiet demeanor almost inquisitive as she walked around. As I crouched down to get a shot of her amongst her flocked friends, she immediately came over for some pets. I obliged, of course, how could I not? 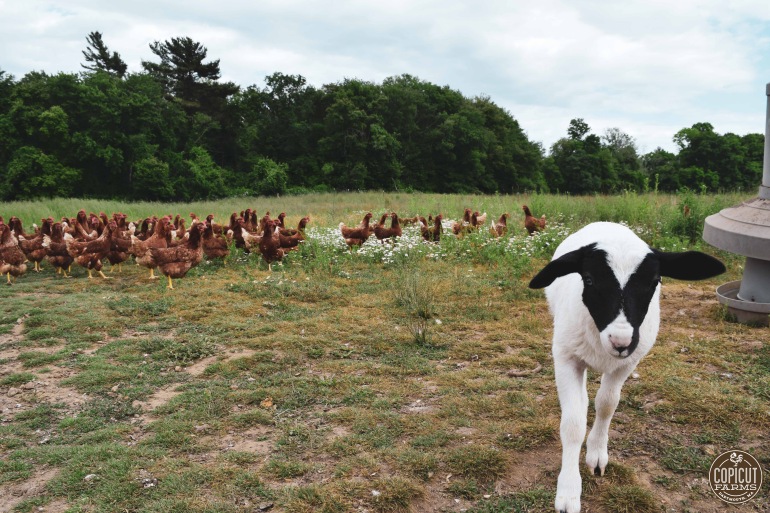 As I sat crouched down on the ground, the hens glanced over, but went on with their clucking and pecking. There were slight divots in the ground, and I began to wonder why there were so many, before I saw a hen lazily rolling about in a ditch, using its wing to flip the cool dirt onto its back.

They were happy here, free to take dirt baths and graze as they pleased, and Elizabeth was proud to show us that. She didn’t need to say much, because her animals said it all. 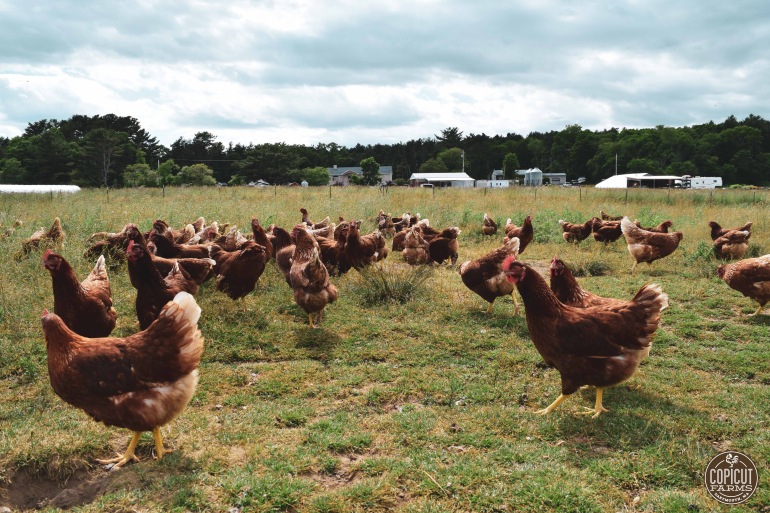 Gwen started rubbing up against Elizabeth’s leg, because the previous affections just weren’t enough for her. Elizabeth scooped her up in her arms, as Gwen affectionately sniffed her ear and Elizabeth smiled a real, genuine smile. The picture below says so many things about our time here, but I’ll let the photo do the talking. 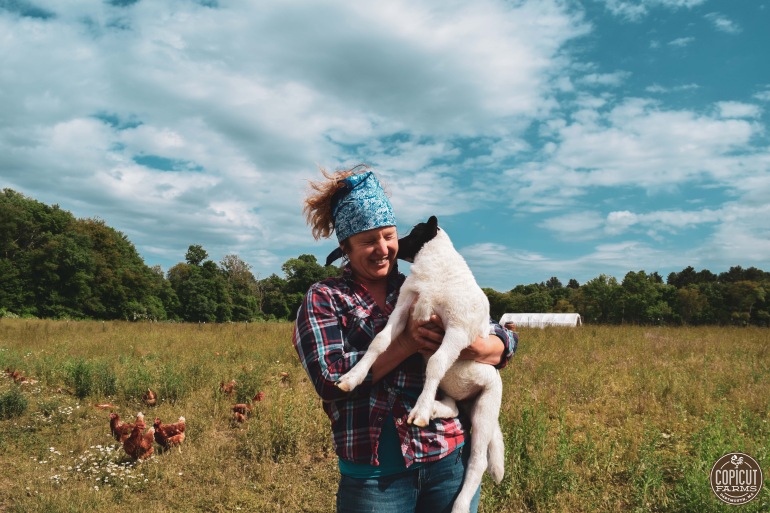 There is something magical about knowing where your food comes from, and understanding the land it happens on. The transparency Elizabeth showed us when talking about the farm and her life was wholesome, and authentic. It made you feel good about our area, and grateful for those who know how to do farming the right way. She wasn’t afraid to answer questions, and open up about her practices. She truly felt grateful to us for respecting the local farmers, and supporting them through the decades by carrying their products.

This Farm Spotlight will be the first of many, and we hope you enjoy taking this journey with us through the acres of land surrounding our local towns. We want to show you how amazing the people we deal with everyday are, and how important it is to support local farmers like Copicut Farms.

Our managers have been friends with local farmers for so long now, that they feel like family. We think it’s time you get to meet the extraordinary people we get the pleasure of talking to every single day.