It was so hot and humid outside that sweat proceeded to bead and then roll down my back. But that didn’t stop our crew from visiting Wishing Stone Farm in Little Compton. The windy roads that led us there were an adventure in and of itself, as we passed by beautiful scenic homes and rolling green lawns left and right.

When we pulled into Wishing Stone Farm, however, it felt like it didn’t belong and yet did, all at the same time. There was farming equipment scattered around, weeds growing, and yet a picturesque tub full of flowers grew next to their farm store, and large greenhouses were full of perfectly rowed fruits and vegetables that pleased the eye. It was beautiful chaos.

We exited the AC’d car (regretfully) and entered the humidity. We were immediately greeted by Silas, the farm owner’s son. His goofy smile and loose movements made you feel like you were hanging out with an old friend, and JD, our produce manager, joked with him right away. We were introduced to one another and walked over to the farm store to check it out while we waited (in the shade of course).

Immediately, I was transfixed by Snoop, the golden haired beauty hanging in the shade, pictured below for reference.

Silas laughed, “he doesn’t like to hang anywhere BUT in that shade!”. His paws were a little swollen from allergies, but that didn’t stop his happy body from wiggling as he came over for pets.

Silas guided us down a dirt laneway, talking about produce seasons and what was coming soon to our stores. It was like walking down a produce wonderland, tomatoes on our right, cucumbers on our left, and some peppers straight ahead. I wanted to move in immediately.

The English cucumbers grew in this magical way, streaming down from the ceiling like some kind of picturesque backdrop for a music video. 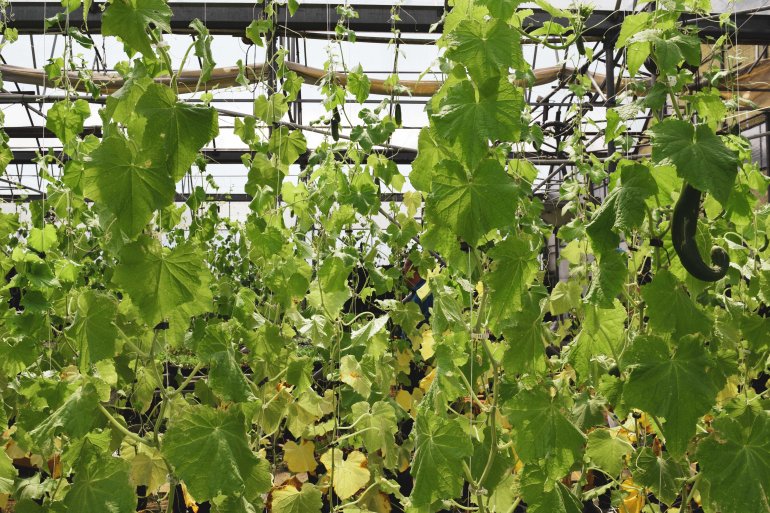 If you thought the air was hot outside, it was a whole other ball game inside of the greenhouses. I was immediately transported to a tropical rainforest, surrounded by cucumber plants and the quiet buzzing of bees.

Eventually, Skip, Silas’ father and owner of the farm, joined us. Decked out in a really cool looking hat and hippy kind of attitude, he greeted us with warm smiles. He immediately took over our tour, bringing us to the farthest greenhouse where the big tomatoes were growing. As we passed other greenhouses, he called off the produce he grew in them like a casual roll call, “ginger, cherry tomatoes, flowers”, and on it went.

Stepping into the tomato greenhouse, I was immediately struck with the smell of fresh, soiled earth. Skip pointed to a box when he saw my panicked flailing after a bee flew towards my head and replied, “these bees are here to help pollinate the plants. We import them, and they do their work in our greenhouse”. His smile was so nice, I almost forgot there was a box of bees next to me…almost. 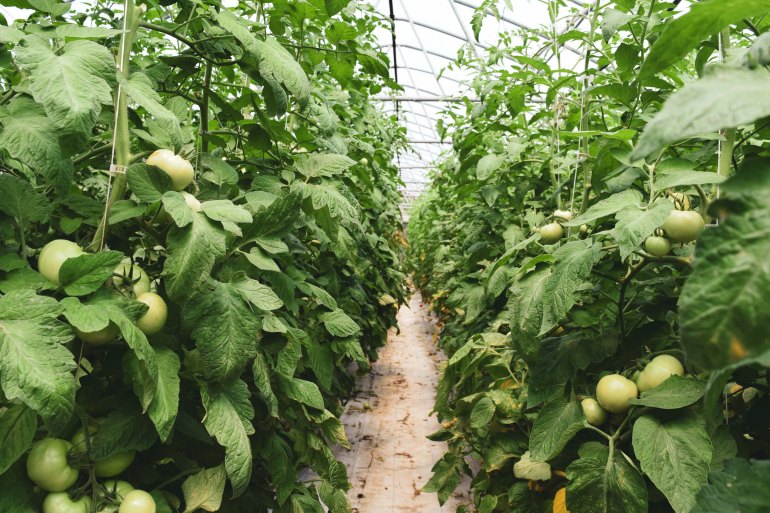 Looking down this row of tomato plants was weirdly calming. It made you feel grounded in a humanistic way. I felt like Mother Nature herself among the plants, the air warm and full of life. There was something about the place that vibrated with nourishment, within and without.

Skip crouched down and smiled at my camera as he checked out one of the red tomatoes almost ready to pluck from the plant. He seemed to enjoy being our model for the day, and it was fun to see someone who didn’t shy away from the camera (aka the torture chamber).

Each greenhouse we stepped in was more interesting than the last, and each one felt like I was being transported to some sort of art gallery or photoshoot. The neat compact rows of peppers shown below had purple, red, and green peppers growing on it. 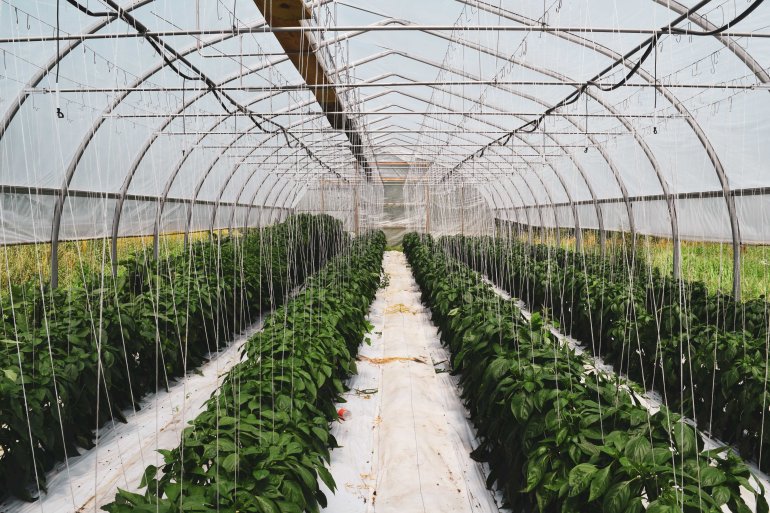 I was awestruck by the purple peppers, so Silas found a ripe one and tossed it over to me. In delight, I sniffed the pepper and it smelled like pepper heaven, full of warmth and vibrance. Pictured below is the pepper (I know you’re dying to see exactly how purple it was)… 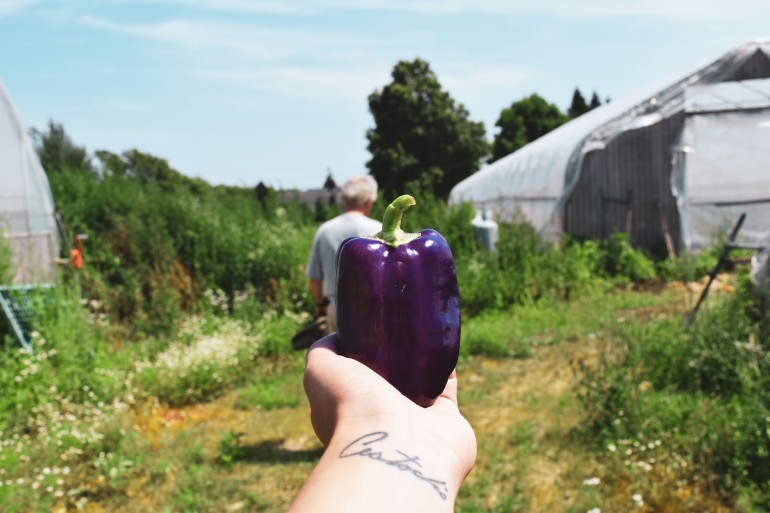 Once we had seen all greenhouses on site, we were asked if we wanted to check out the off-site fields. Confused, but willing to follow along, we hopped into our cars and followed a few miles away to another field location.

Skip explained that they farm on local properties, so it’s a mutually beneficial relationship between local property owners and the farmers. It allows them to farm across many acres of land, and different types of soil. So, we drove a few miles and stepped onto new grass, ready to take a look at some peaches.

Silas pulled up behind us, and a little dog hopped out of the car and immediately took off, nose to the ground in a blurred white streak, clearly hunting for something. His name was Dewey, and he was always on a mission. He didn’t have time for human interaction when he was out in the fields, it was work time.

Skip led the way down the rows of trees, which were swaying in the breeze like some kind of romance movie trailer scene. I half expected Julia Roberts to come out from between the rows, but unfortunately that didn’t happen.

Skip gently tugged one of the branches down, checking out the fruit and seeing if it was ripe enough. He had no problem modeling for me, his cute farmers hat getting lost in the leaves.

He ripped off an unripened peach to explain to us the anatomy of a ripe peach. We were all a little shocked when he bit into the clearly small, and very sour looking peach. Nose scrunched, and tongue in pain just thinking about how sour that fruit must taste, we listened to his advice. A peach should not be white inside at all, and they can tell the peaches are ready for harvesting when they are yellow and sweet through and through.

Silas and Skip talked to our produce manager about the trees, which would be taken down after this year. They had outlived their prime, and it was time for another crop to take place here.

“You won’t grow peaches here again?” JD asked, while leaning against the peach tree (if he was trying to look like Julia Roberts he was failing miserably).

“Oh no,” Skip replied, “once we decide to pull the plant, another type needs to take its place. That’s how you preserve the soil and the health of the land.”

Well, we all learned quite a bit about agriculture in that field.

Walking back to our rides, Skip noticed JD had driven a motorcycle and was talking to him about it. At one point, Skip hopped right on the bike, smiling like crazy, “I’d love to get one”. Then, he hopped off and used the back of his car to diagram how tractors can flip over pretty easily if you aren’t using them right. What that had to do with motorcycles, I wasn’t sure. To be fair, the second that the motorcycle discussion came up, I spaced out a bit watching Dewey tunnel into the grass with his nose.

Skip was an honest, simple man who was extremely intelligent when it came to his practices. He felt like a genuine 60’s soul, who cared deeply about human connection to the land, and the foods we put into our mouths. He wasn’t ashamed of the dirt on his car, as he drew on it with his finger, or the need to keep his farm looking picture perfect. He loved to tell stories, and spend quality time with his son.

I had to snag a photo of the two, and got an added bonus; Dewey. As I asked them to stand in front of one of their many fields for the photo, Silas put his arm around his father’s shoulder and pulled him closer while beaming ear to ear.

They cared deeply for each other, and bonding through the family business has truly been something worthwhile for the both of them.

When the photo was over, Skip bent over and kissed little Dewey on the top of his head, and I couldn’t help but smile at the small but meaningful gesture. He might be a quiet man, but his love spoke volumes.

You can find their many different fruits and vegetables in our produce department all year round. Their peaches should also be in soon too, so keep an eye out for those locally grown beauties.

As always, we want you to feel the connection we experience everyday in our line of work. It’s important you know where your food comes from, and to choose to support the local farmers who care so deeply for the area we live in.