I want to start off by saying that the famous Sweet & Salty Farm yogurt has been one of our most coveted products. It comes and goes as fast as we can put it out; and because of its seasonality, it’s not around for very long. We wanted to take an adventure down to the farm and see what makes this particular yogurt so much more popular than the others we carry, and show you the face behind a local delicacy.

Our car was loaded with the usual crew, Matt Ponte, my fellow communications worker, Ryan DeMello, the Lees Market Dairy Manager, and myself, Kelsey Cestodio, the journalist/photographer for the day. We drove down a long windy road, waving to an older gentleman who was walking around at some point down the dirt road. When we reached the end, we were parked in front of a small building, and an adorable red-headed girl waved from her spot on the bench. As we hopped out she walked right over and introduced herself as Laura, her bright smile, freckled cheeks, and calming nature made us instantly feel welcomed.

After we complained a bit about the weather (typical, I know), she guided us to the milking parlor. Our footsteps echoed off the walls as we walked in, and the place was spotless. There wasn’t a speck of dust or dirt anywhere, just freshly cleaned, pristine tubes and piping used to milk the cows. Laura’s voice bounced off the walls as she told us this was a brand new facility they built for the “girls”, where they walked in to get milked in the morning. 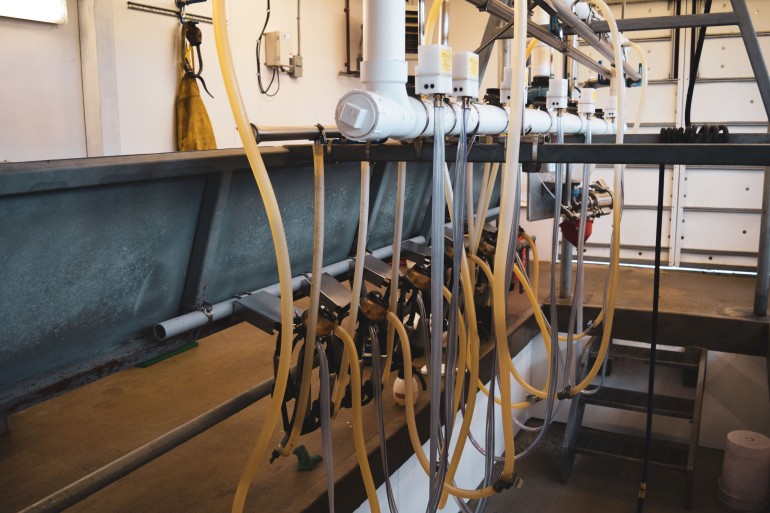 Laura then guided us out of the milking station and into the milk processing area. We had to put on these funny blue booties to make sure the area was still sanitized. I felt like a smurf as we shuffled along the still damp concrete floors from the spray down they had just had that morning. 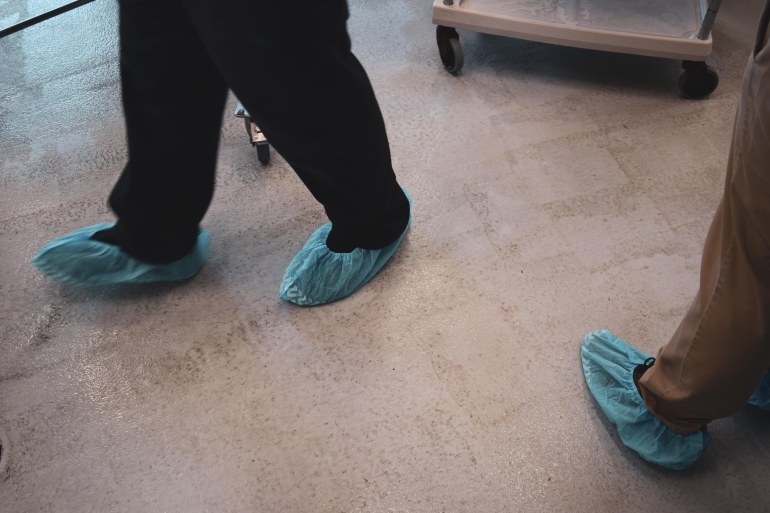 As we walked into the double doors, my face was hit with a warm gust as we walked past a large door that was propped open. Laura was excited to open the door and show us the prize inside, freshly-made Sweet & Salty Farm yogurt, sitting on a rack doing its thing. She explained that the yogurt was activating inside the containers. The milk is processed, cultures are added, and the controlled heated room activates the culture to give you all the good probiotics you need in each spoonful. 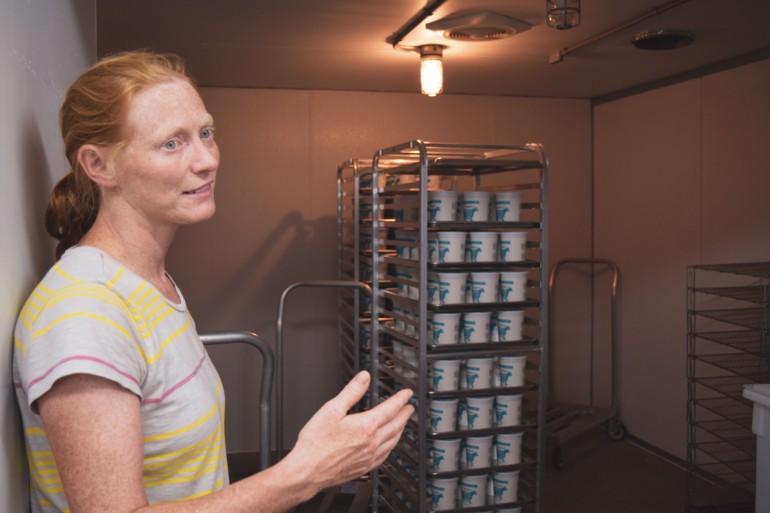 Once the yogurts leave this part of their journey, they head to the cooler. Ryan poked his head in to check out some cheese that was aging and yogurt that was cooling down before being shipped off to retailers like us. 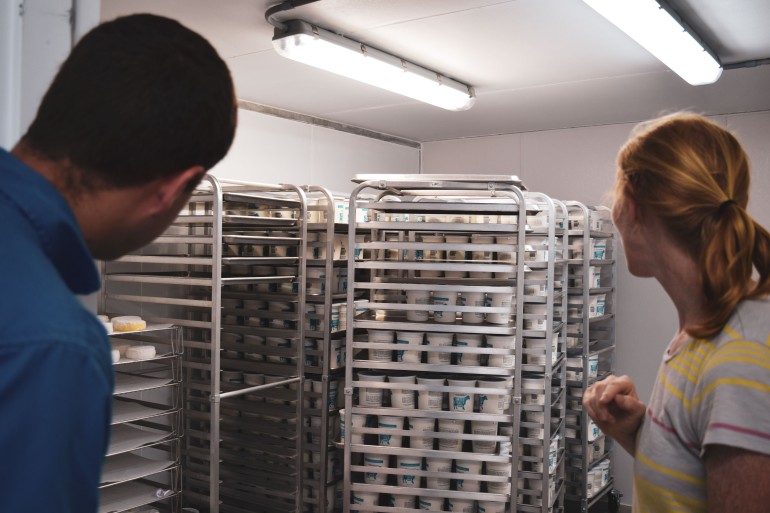 She walked us inside of the facility where they processed milk into yogurt, and the windows were like picture frames into a world of rolling green hills and butterflies. She explained the process of how the milk becomes yogurt, showing us the giant vat used to heat the milk. 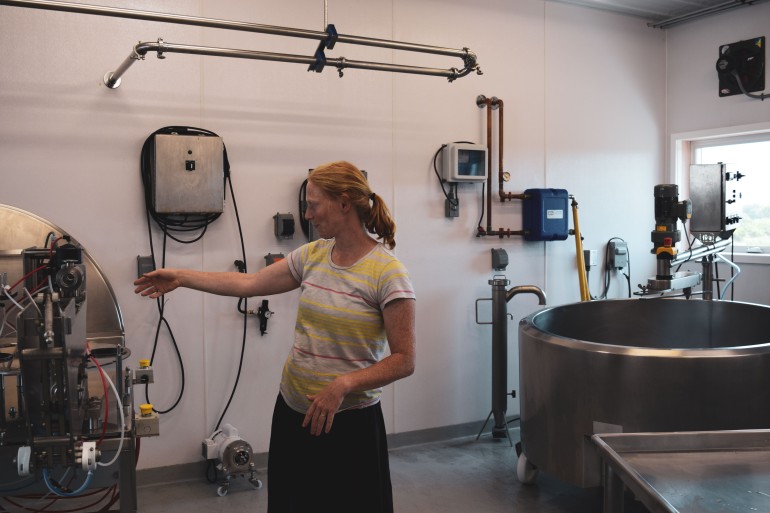 Once it’s ready for packaging, it goes through an automated machine that pours the delicious goodness into each individual package before sealing it for the heater. 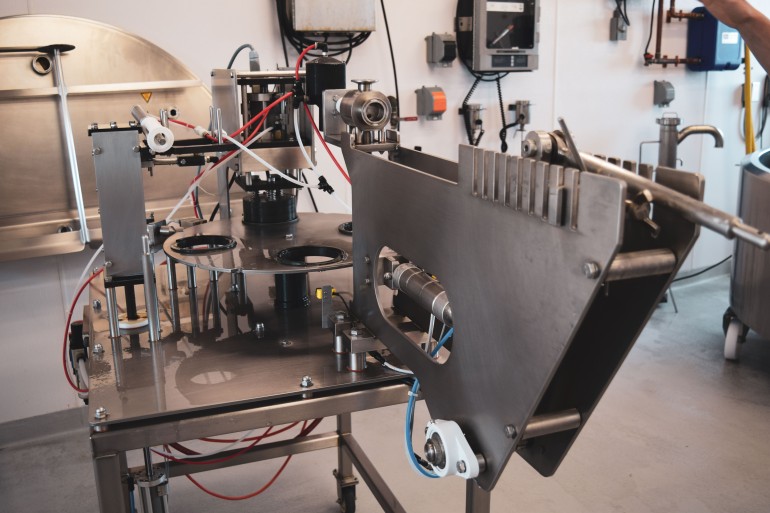 As Laura was talking, a groundhog decided to pop his head out of a hill beside the window and Ryan got a huge kick out of it. Laura laughed, glancing over to the window to see if she could find him, “darn it! I still haven’t been able to see him yet. We figured there was one living in there. You’re lucky you saw him!”.

Laura moved away from the window and turned to us saying, “the cows are about a mile away out at pasture, you want to venture down to meet them?” and we all just about ran out the door towards the cows.

As we got outside the milking facility, Laura showed us the colorful bins where the Jersey cows’ minerals were stored. “We give them free reign to eat whatever minerals they want, they are smart and know exactly which ones they need at certain times of the year. We think this really makes their milk taste best, because they are eating the minerals they aren’t getting from the grass or hay.” 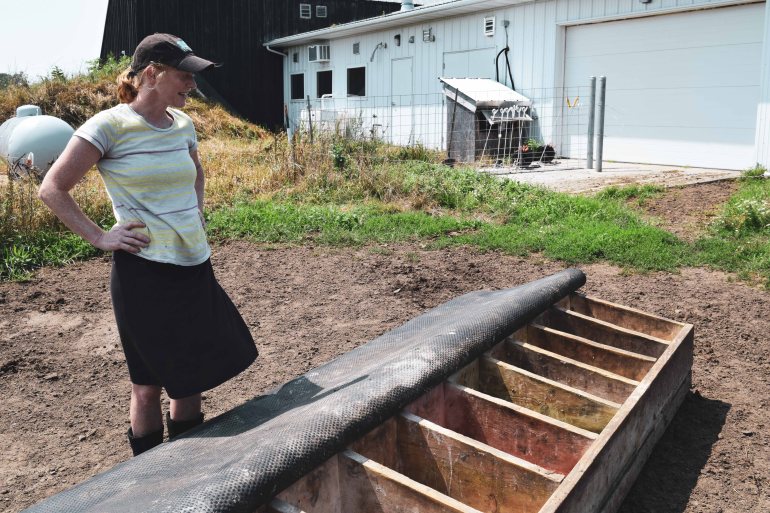 And with that, and some electric fence maneuvering, we were off on a hike down the picturesque path to pasture. No amount of words can describe how beautiful that trail was, so I suggest looking out for our video of the trip to Sweet & Salty Farm, because the mile long venture down the dirt path was one of the most beautiful I had ever been on. Butterflies fluttered past, the trees swayed in the breeze, and the shade was refreshing on such a hot day.

Laura’s baseball capped head led the way, as we all joked about different things on the long walk. It was refreshing to spend time outside with the farmers, and a nice break from desk work. 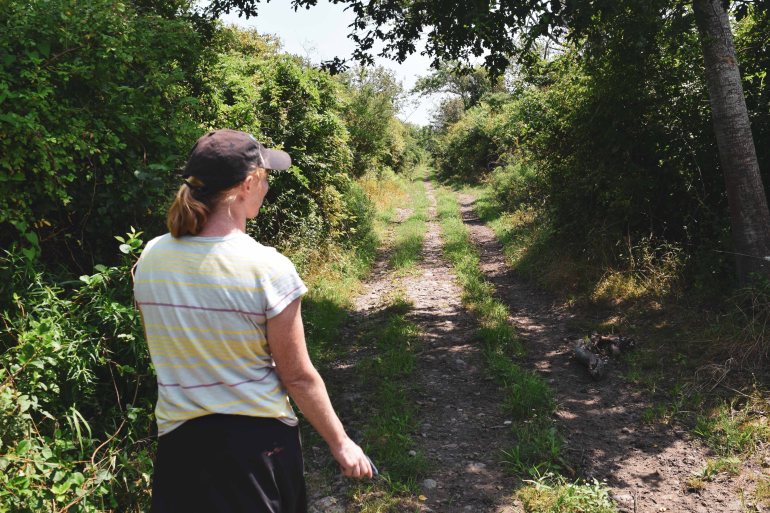 Even though sweat dripped down our backs, we were so excited to meet the cows (Jersey cows are my favorite, they look like giant deer). As we reached the large clearing at the end of the trail, Laura turned her head as she walked and smiled, “the girls really went as far out as they possibly could, they are definitely giving you guys some exercise!”

Through the trees and into the clearing was the herd, a little under 20 ladies who were munching on some grass in a field. It was such a wholesome sight to see. The confident ones came over first, tentatively checking us out before daring to walk over. 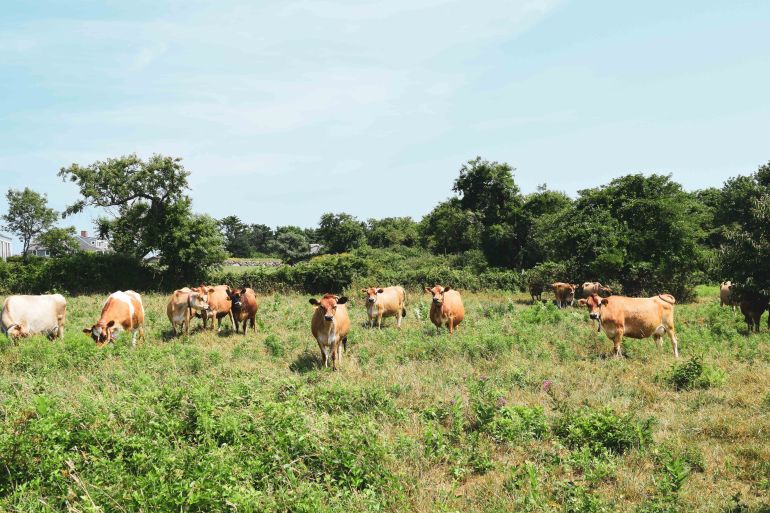 The flies were by the hundreds on their faces and eyes, and Laura’s voice was a bit sad as she said, “I feel so bad about the flies bothering them, but there isn’t much you can do,” but that’s just cows for you. They seemed unfazed by them, as they swish their tails and sway their heads to move them off.

I crouched down and got the shot below as Agnes gave me a glance. Laura knew all of their names without looking at the tags, even from far away, it was pretty impressive. 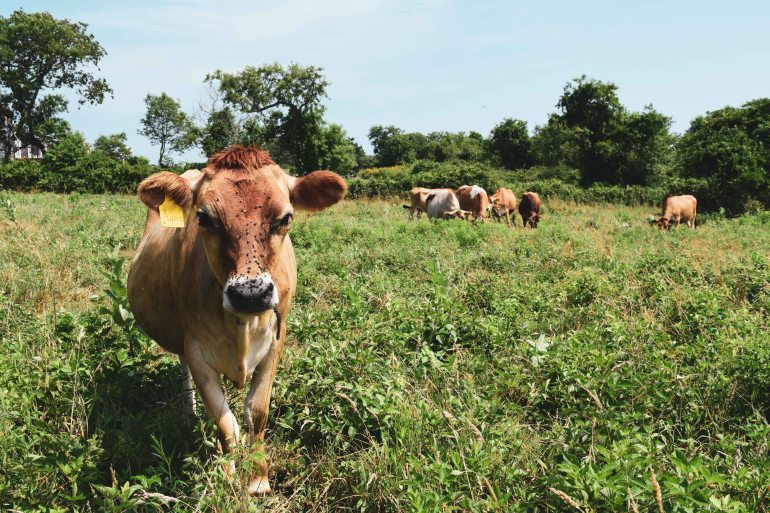 As I was shooting some more pictures, I turned around to talk to Laura some more and heard Ryan’s voice, tinged with anxiety, as he yelled out “watch out Kels, there’s a big guy coming in hot” and sure enough I turned around to find a big girl trotting over to see what all the fuss was about. Ryan was having a hard time remembering that the cows are all women. Laura laughed, “that’s Clementine, she’s like the Matriarch”. And sure enough she confidently came up to us, sniffed our hands, and then led the entire group past us and into the shade of the trees. 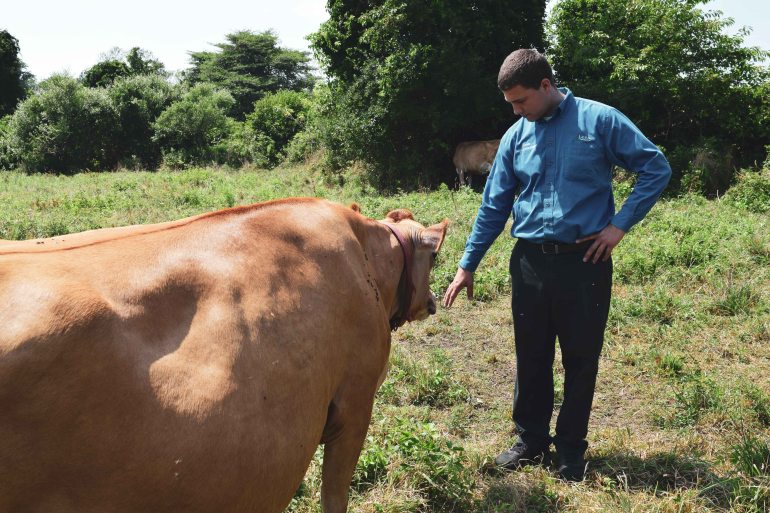 I ended up getting the picture above of Clementine licking Ryan’s hand before guiding the group out into another field. 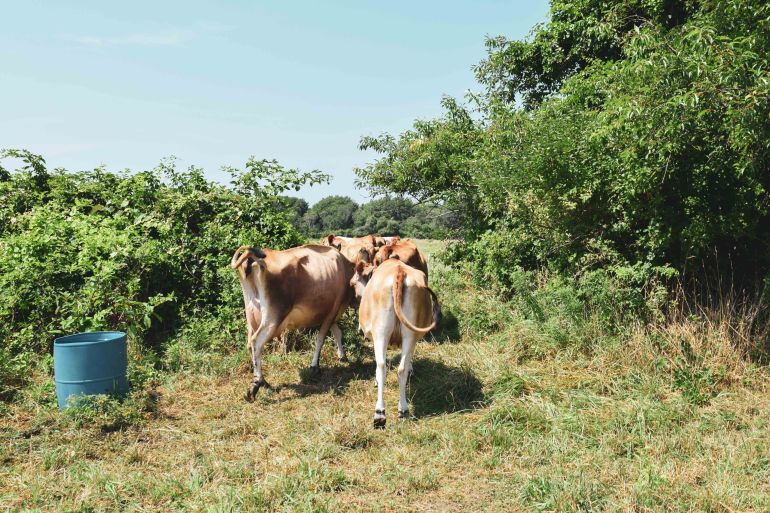 I couldn’t get over how friendly this one particular girl was, she kept coming back over to us for more pets and affection, Laura smiled and said, “that one’s Snowflake, she’s the friendly one of the bunch”. Her face, shown below, was dark black, she was the most unique looking of them all, and fearless around people. 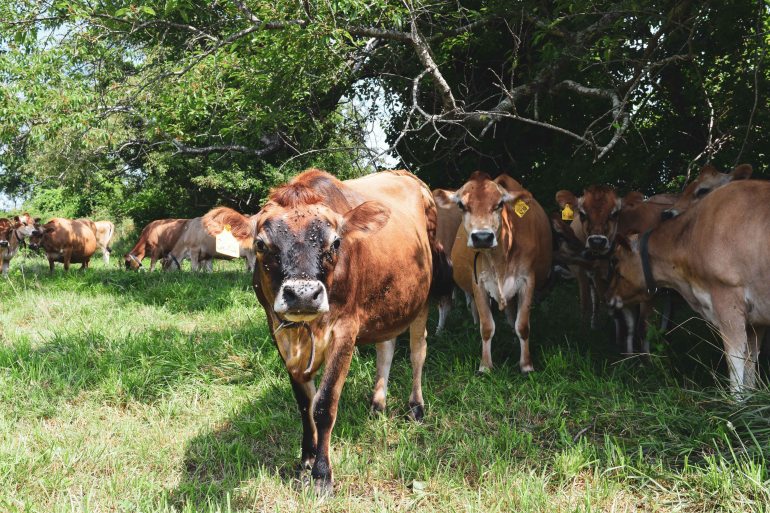 One of the cows was really going to town on the grass, and Laura explained that the girls actually use their tongues to rip the grass. “Look at him, he’s chompin!” Ryan yelled out. Laura turned to him, and smirked, “they’re all girls”. Ryan laughed back, “uhh…yeah that was real stupid”, he mumbled before shaking his head and reaching out a hand to pet some more cows. 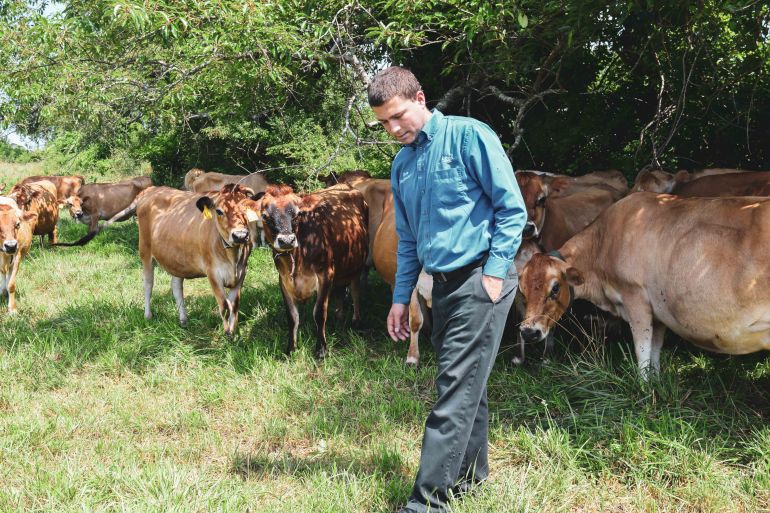 Once we had spent a long time petting the cows and watching them graze, it was time to head back to camp. Laura led the way with the electric fence stick, using it like a walking stick as she told us stories of how she started the farm and the business. Her husband worked as a cheese maker in Vermont for a number of years, and they decided to move back to Little Compton to be near family.

The idea of Sweet & Salty farm was something they started together, and have loved doing ever since. Her husband does the farming and cheese making, and Laura does the processing and marketing. Their backgrounds helped them really bring the business to life, and you can tell she cares deeply about the cows. Her young daughter named all the cows herself, and that was definitely the cutest thing we heard all day. 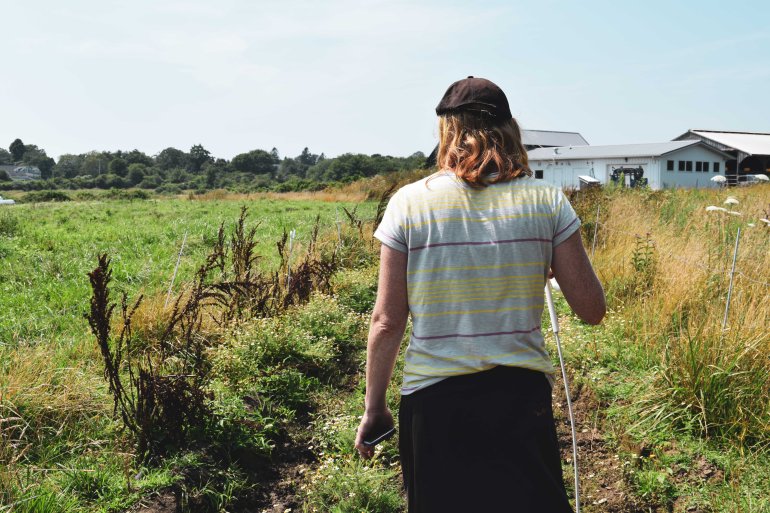 Our venture out into the pastures of Little Compton was definitely the most picturesque of all the farms we’ve been to so far. The smell of fresh grass, thriving summer life and clean air was refreshing for the soul. There is a profound connection between Laura and her animals, she deeply cares for their well being, and making sure they live a comfortable life on the acres of rolling green land. If I was ever reincarnated as a cow, I certainly wouldn’t mind living on Sweet & Salty Farm.

You can find their famous yogurt at our stores, Lees Market in Westport, and Clements’ Market in Portsmouth, RI and Manomet, MA. If you haven’t tried this locally revered treat yet, you definitely need to. Every year our customers go crazy when it’s back in season, so find out why it’s so special for yourself!