It was bright and early in the morning this time around. Our crew met up at Sampson Farm, Matt Ponte, my fellow communications worker, JD, the Lees Market Produce Manager, and myself, Kelsey Cestodio, the journalist/photographer for the day, arrived at around 8 am. It was a cool morning, misty and foggy, the dew still clinging to the grass.

We were greeted by a black cat, while we waited for Jerome and his brother Jeff to walk over. She was rolling around in the wet grass and came right over to get some affection. Of course I had to stoop down and pet her. She had the prettiest green eyes and seemed to really appreciate a good ear scratch. 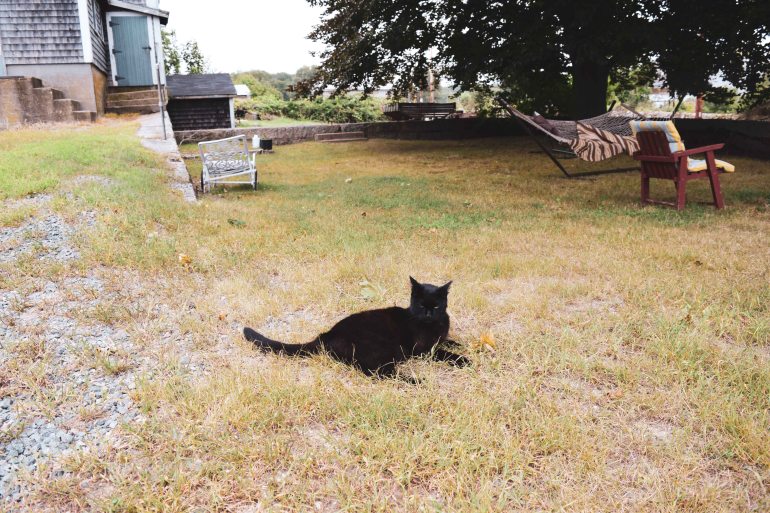 Jeff walked over and laughed “watch out, she will bite ya if she feels like it. You wanna take her home?!” I smiled back and stood up to shake his hand as he and Jerome greeted our group. Matt Ponte, my coworker, lived a stone-throw away from Sampson Farm. His family has been close to the Sampson family for generations now. They greeted one another like family, and it was heartwarming to see.

They asked if we wanted to walk across the road to watch them harvest, and we said of course and started the trek across Old Bedford Road.  The cat, unfortunately, did not follow.

As we walked onto the dirt covered fields, it was hard to believe there was a crop growing there. It was just rows of dirt, with what looked like dead vines laced across the top of it, but as you walked and looked carefully, little potatoes were peeking out on the surface. 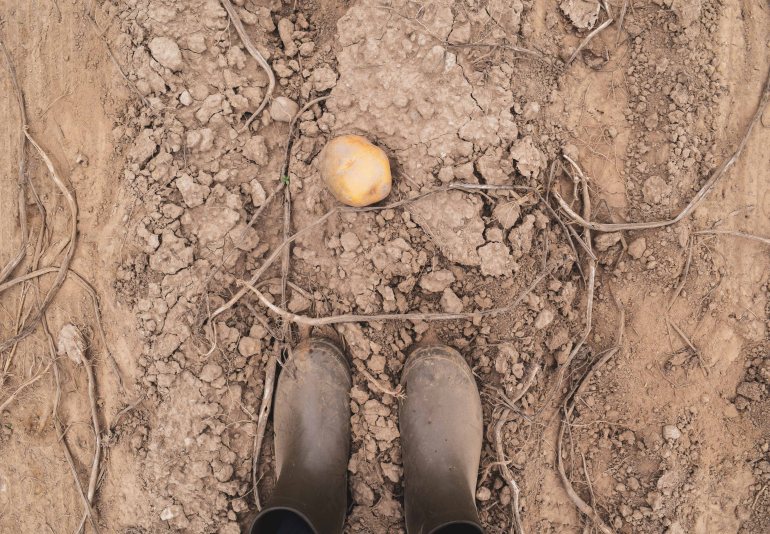 For the first row of harvesting, we watched from afar as the machine started up. It was old, rickety, and blew up tons of dust from the ground, but it worked its magic on the field. As Jerome worked the machine down the row, Jeff rode a tractor alongside him with a trailer that caught all the potatoes as they tumbled off the conveyor belt. 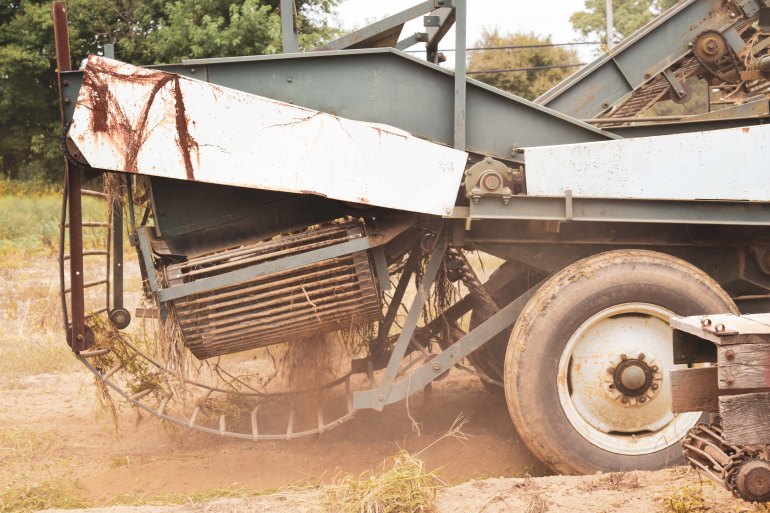 After they finished the first row, we decided to hop on the machine to see how it looked from the workers perspective. Jerome’s wife, Monique, and their helper, Ronnie, picked off the weeds and twigs that got pulled up with the potatoes as they rolled on by. 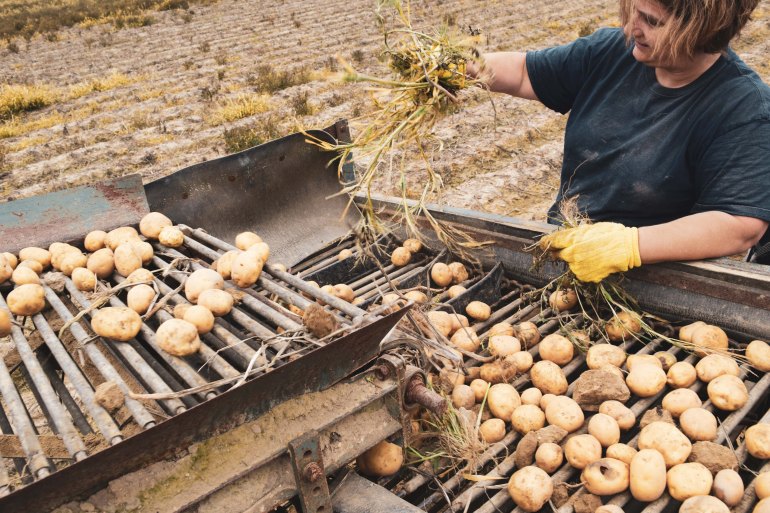 If you looked down from our position on the tractor and under our feet, you could see the potatoes being unearthed and carried up and around until they passed in front of us and then over into the trailer. Dust was whipped up and blown into the air, and pretty soon we were coated with it. My camera lens gritted with dirt as I twisted the lens in or out, but I felt like a little kid again on an adventure who was getting a little dirty in the process.

JD helped out by grabbing the leftover twigs before the potatoes dropped down into Jeff’s tractor. Matt and I were just trying not to fall onto the spinning rakes below to our deaths. 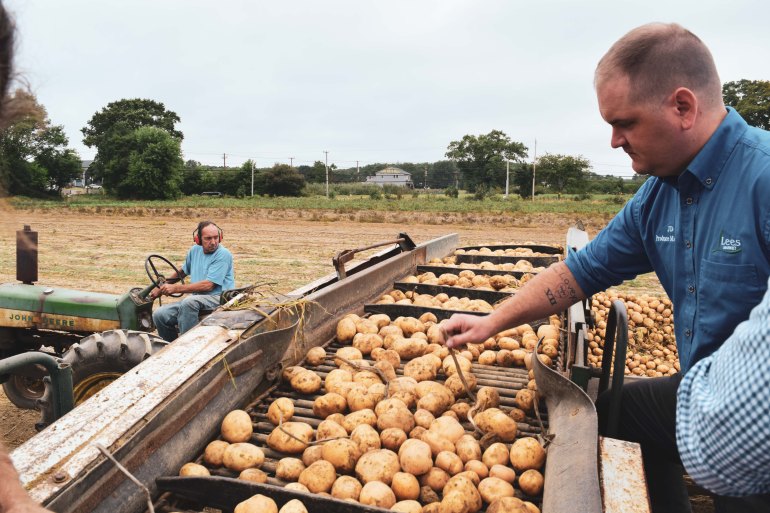 The potatoes dug up from only two passes on the field was enough to fill the entire trailer with potatoes. I couldn’t believe how many were pulled up in just a small section of their field. Matt reminded me that they farmed on tens of acres of land, with fields circling all around us. That’s a lot of potatoes. 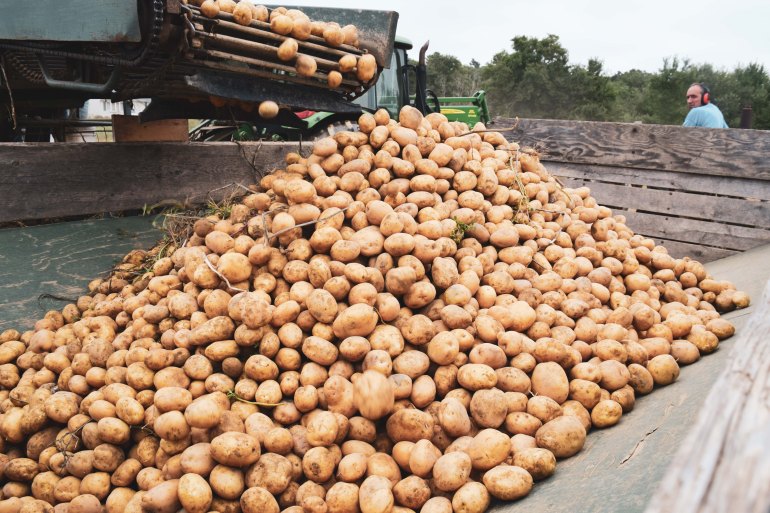 Once we finished the rows, we hopped off the machinery and walked back over to the farm, as Jerome drove the trailer full of gold into the back barn.

Jeff walked beside us and passed by a blackberry bush. He plucked a few of the berries off and asked if we wanted a snack. We each got a ripe blackberry and it’s sweet and sour flavor burst in my mouth as I chewed. It was absolutely delicious and made me smile. Summer might be almost over, but in this moment, summer was still here. 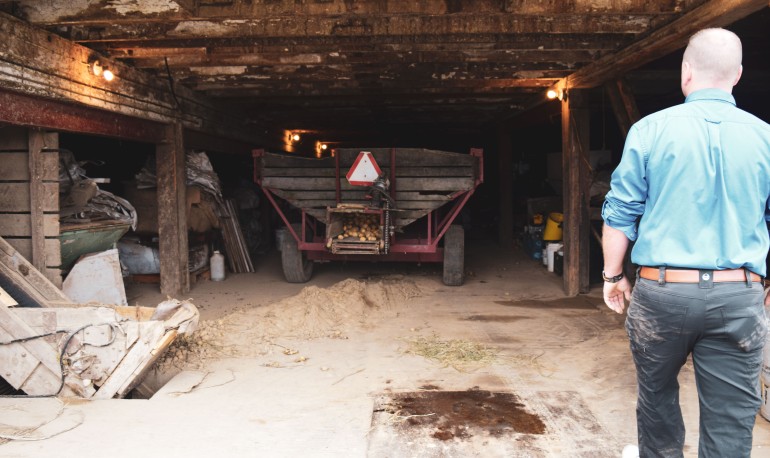 Once we finished our snack and made it into the barn, the potatoes were loaded onto the lower level conveyor belt which you can see to the bottom left of the photo above. After they were all transferred onto the belt, Jerome guided us up the back steps to the potato processing area.

It felt almost as if we were entering into a scene of a horror movie. All the windows were boarded shut to keep the potatoes cool and in a dark place. It helped them stay nice and fresh until they were moved into the bunker. Some of the machinery was over a hundred years old, and made a faint creaking sound as it ran. Cobwebs laced along the vaulted ceiling and the walls were painted black.

While it was creepy, it was also weirdly peaceful up there. The potatoes started their run through the water, getting deep cleaned and sorted by the machine. Ronnie helped the potatoes enter the washer, Monique sorted the “ugly” potatoes, and the larger ones that didn’t fit through the slots ended up in bags which went to chefs and restaurants. 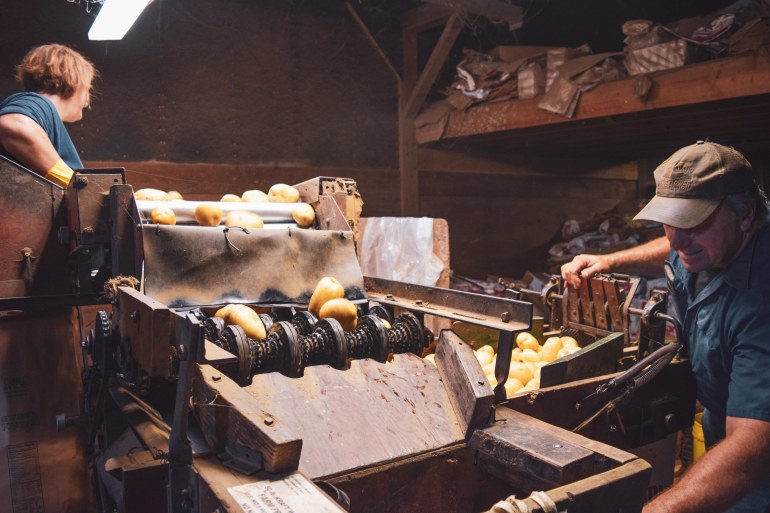 Jerome bagged the regular potatoes, and passed the filled bags onto the sewing machine, where a really old but super cool looking needle sewed yarn into the tops of the paper bag. Jeff would then move the bag onto a pallet and stack them neatly for storage. Everyone had their own position in the lineup, and we went through the entire load of potatoes pretty quickly. 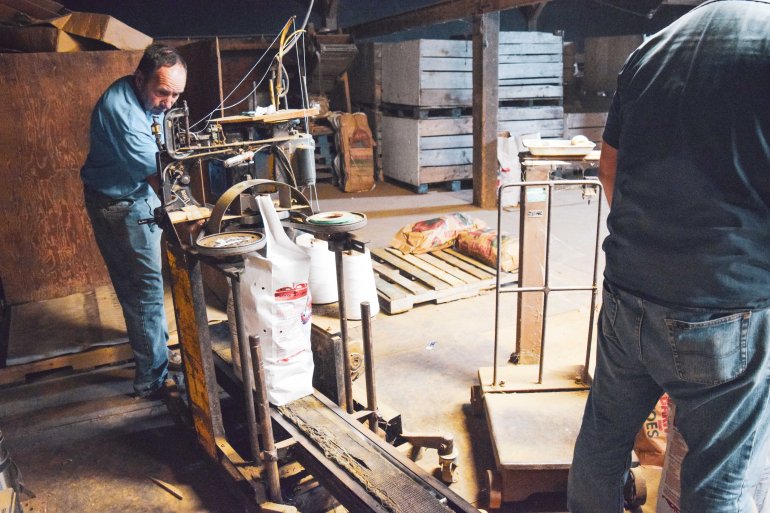 We were all fascinated by the sewing machine, it would push the bag through super fast, and you could see the pins and wheels moving as it closed up the bags. It made a satisfying sound as it thread through, and was very entertaining to watch.

Jerome explained that their uncle was a brilliant handyman. He built the machine they used to dig up the potatoes, and the machine that cleaned the potatoes and sorted them. All of it was handmade and passed down through the generations, a truly timeless piece of equipment. 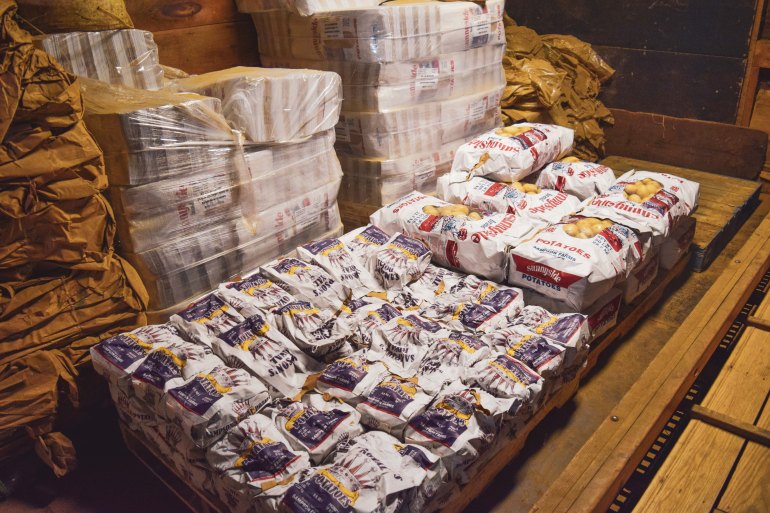 Once the potatoes were processed, loaded, and stacked, Jerome asked if we wanted to check out the red potato field. So we hopped into his truck and drove around the fields to the left of the barn. Jerome and Matt joked about old memories on the farm, and it was fun to listen to the stories that were passed along throughout our time there.

When we reached the field we hopped out, and Jerome used a pitch fork to show us the red potatoes lying under the ground. JD picked one up to test it out, and mentioned to Jerome “these are just about ready now”. 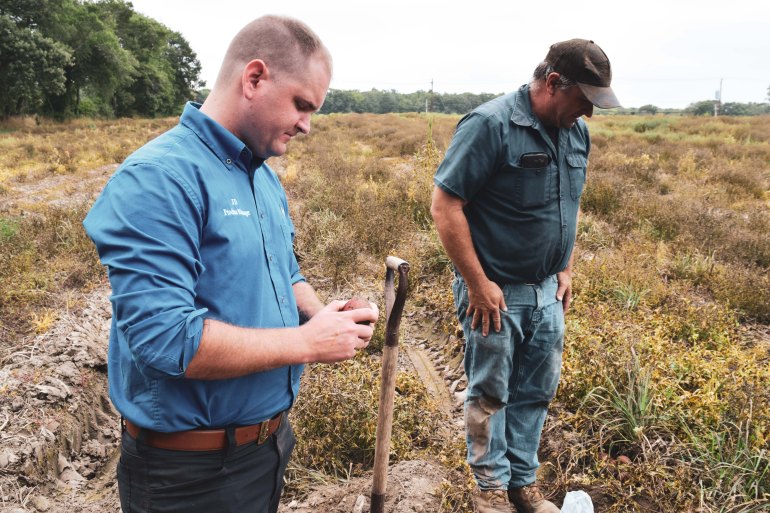 Jerome bagged the red bliss up and turned up to us as he loaded them in, “people travel from all over to get our potatoes during the colder months. They love to stock up on the prime pickings when they come out.” And if you have ever had their potatoes, then you know why people travel. They hit peak season during the winter, and taste amazing no matter how you decide to cook them. 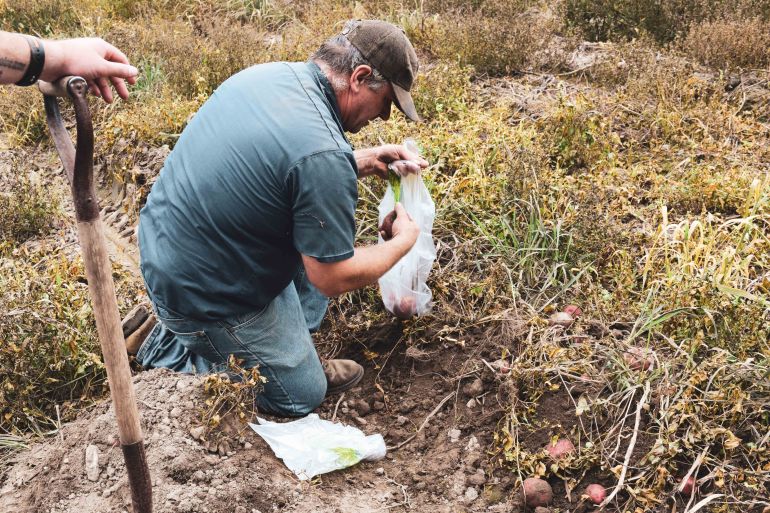 We loaded back into the truck and drove around to the bunker, which I was really curious to see. From ground level, it looked like a decent sized barn that had sunken a few feet into the ground, but the inside tells a totally different story.

Jerome unlocked the front doors and pushed them open, and we immediately felt a cool gush of air. We walked down a ramp, moved aside some large tarps, and took in the site of the GIANT bunker. 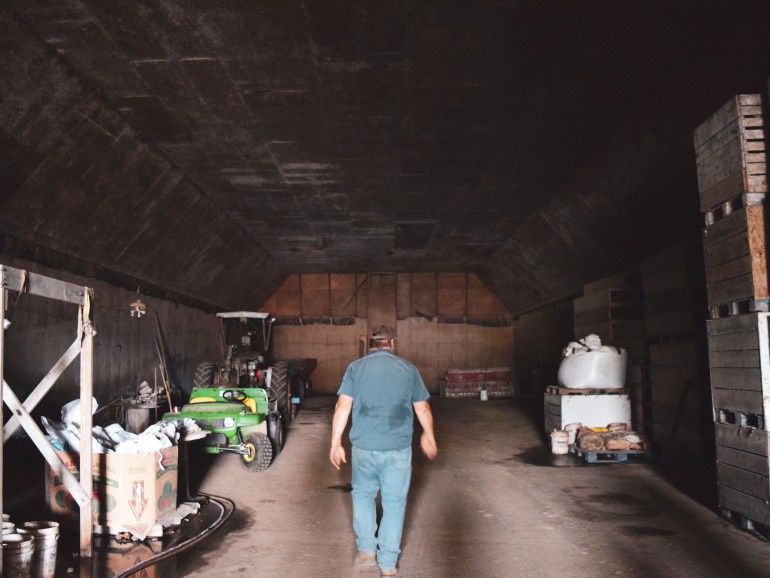 The pictures really do it no justice. The ceiling was incredibly high up, and it was a long stretch that had our voices echoing all the way down it. Jerome told us that they stacked the potatoes up to 11 ft tall inside of the bunker, and my jaw just about hit the ground. That’s a terrifyingly tall wall of potatoes.

As we walked back out of the bunker and into the daylight, we hung around and chatted to Jerome for a while. He was such a kind and gentle man, you could tell he had a big heart and truly enjoyed his life on the farm. His smile was genuine, and he felt like an old friend even though I had just met him only hours ago. He shook our hands goodbye and we all walked our separate ways to our vehicles.

As I was reaching close to my car, I snapped a photo of the farm sign below, which was one of the cutest farm stand signs I’ve ever seen. 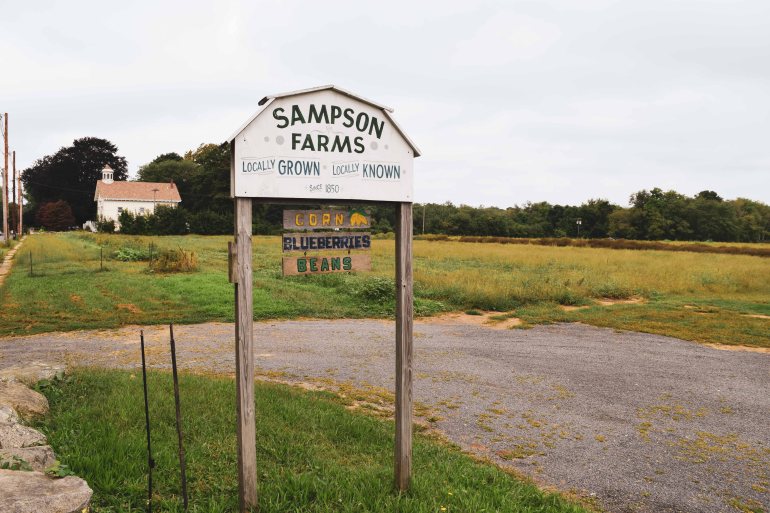 If you haven’t already tried Sampson Farm potatoes at Lees Market, I think you may have been living under the dirt with them. We have them available most of the year, and they make the most amazing fries, mashed potatoes, soups, hash browns, and whatever else your potato-loving heart desires!