It was an uncomfortably hot day, as Debbie the specialty manager, Matt my fellow communications Manager, and myself made our way over to Wareham to visit the Dorothy Cox chocolate factory.

Not going to lie, I was fully expecting to live out my childhood Willy Wonka chocolate factory fantasy that day.

As we walked into the front of the building, I couldn’t help but immediately notice the beautiful smell of chocolate that lingered in the air. We were warmly greeted by Shirley, who does the bookkeeping for the family business. She let us explore the store front area, which was perfectly tidy and brimming with sweet treats. The AC felt so nice compared to the sticky humidity outside.

We were handed hair nets (except Matt since he’s bald), and instructed to tuck our hair into it. Then, Shirley led the way as we walked past the storefront and into the factory itself, and we were met with slightly warmer air and a heavy aroma of chocolate.

I couldn’t help but smile as we witnessed what looked like toffee being cut on top of a table, and three bearded gentlemen working hard. We all shook hands, and were introduced to Fran, and he and Shirley’s two of three sons – the oldest and the youngest. Debbie talked to them like she had known them for a hundred years because she’s been working alongside them at Lees for decades now. It was a nice familiarity to listen to them discuss the candy business and how their family was doing.

We watched as one of their sons prepared the buttercrunch on the table, which was super satisfying to watch as he separated the uniformly squared candy into chunks.

He started to laugh as he mentioned the candy hardens pretty quickly, because the second he said it and lifted a piece it broke diagonally instead of on the line.

To the left, they were cutting fudge fresh into squares, and it looked every bit as delicious as it smelled. The soft chocolate was still tough to work with, as it stuck to the table as well.

The cooling racks were decorated with yummy clusters that had just been made, and were also aesthetically pleasing to look at in their uniformity. 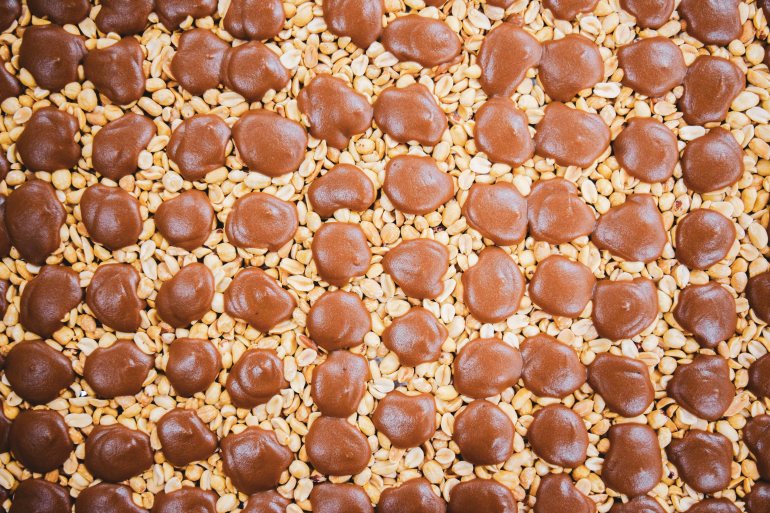 It was so hard not to grab one and eat it. I asked Fran if he ever feels tempted to eat the candy all day long, and he laughed and said “I usually skip breakfast because I know I’ll be eating about a quarter to a half pound of chocolate every day at work”. 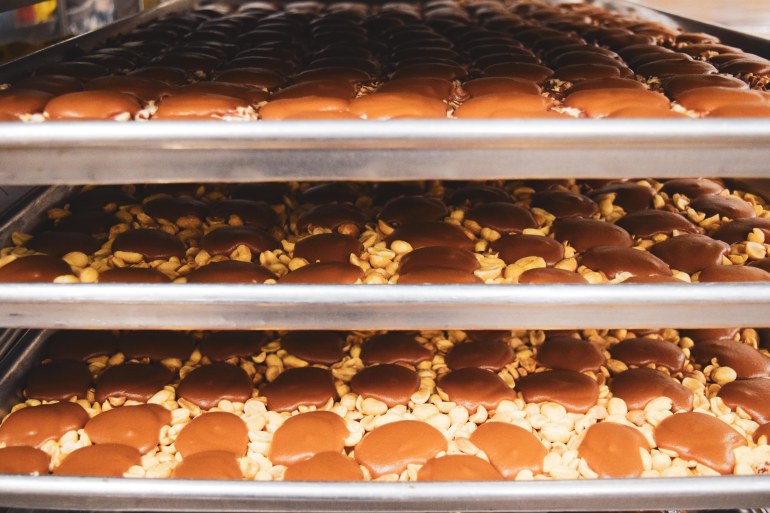 He showed us how the chocolate comes to them, and it was cool to see how the gigantic bar is transformed into the small little treats that we all know and love.

Fran mentioned that they have now been in operation for 92 years, and that the company started because of the Great Depression. Dorothy used chocolate to support herself during the difficult times, and she would go to the market and sell her candy. It grew from there to become the company it is today, still in the family and still deeply rooted in the local community.

We moved into the machinery room, where they make the chocolate covered treats. Fran joked with us that he took over a chocolate lollipop business and has since stopped making them, but now he’s stuck with “more chocolate molds than anyone on the east coast”, followed by a chuckle. His laugh was the kind of deep-bellied laugh that made you want to laugh too. 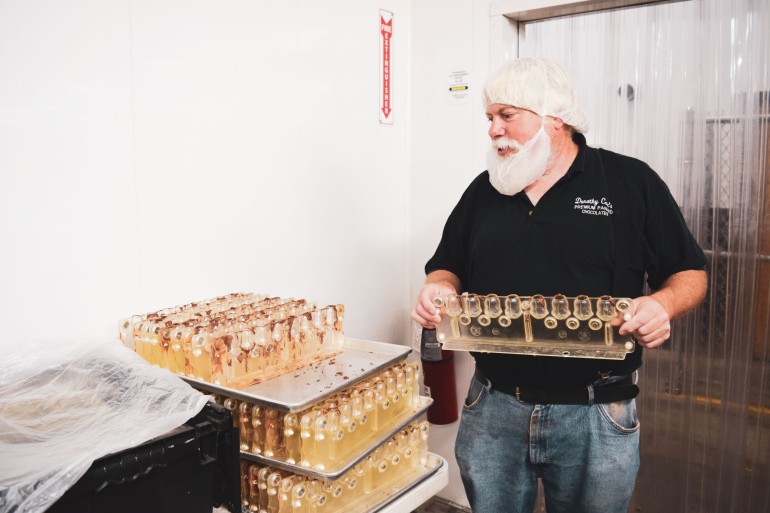 We watched as one of their long time workers poured melted dark chocolate onto espresso beans.

I cannot even begin to explain how heavenly coffee and chocolate smell when mixed together, but I’m hoping you can imagine it with me right now as you look at the photo below.

We moved over to the chocolate coated pretzel station, where Fran’s sons worked on laying out the pretzels as the belt moved.

They were particular about making sure the pretzels didn’t overlap, and were ready to go under the chocolate waterfall happening down the line. 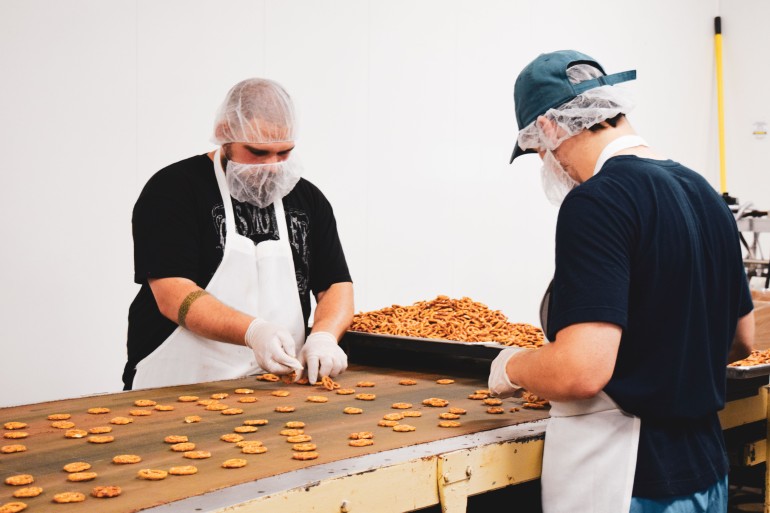 Why yes, the chocolate waterfall is just as magical as you might think it is. Feast your eyes on the beautiful sight below…

The candies moved from the cascading wall of decadent sugar onto the conveyor belt for sprinkles. 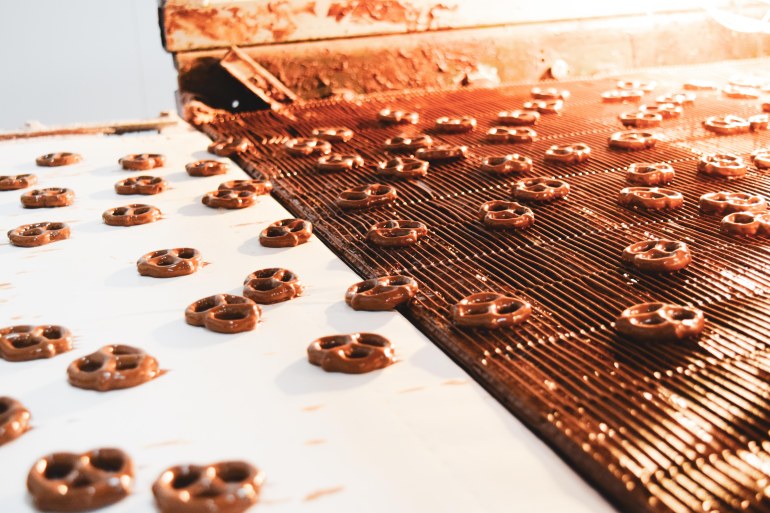 They were glistening in the warmth of the light bulbs, and the liquid chocolate smelled so delicious. 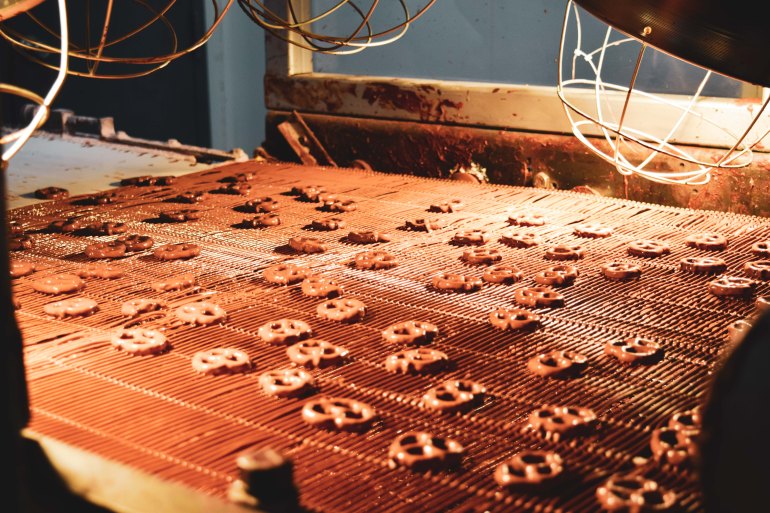 Fran guided us around to the other side of the conveyor belt where a quiet woman worked at scooping the hand-sprinkle pretzels into a bin. 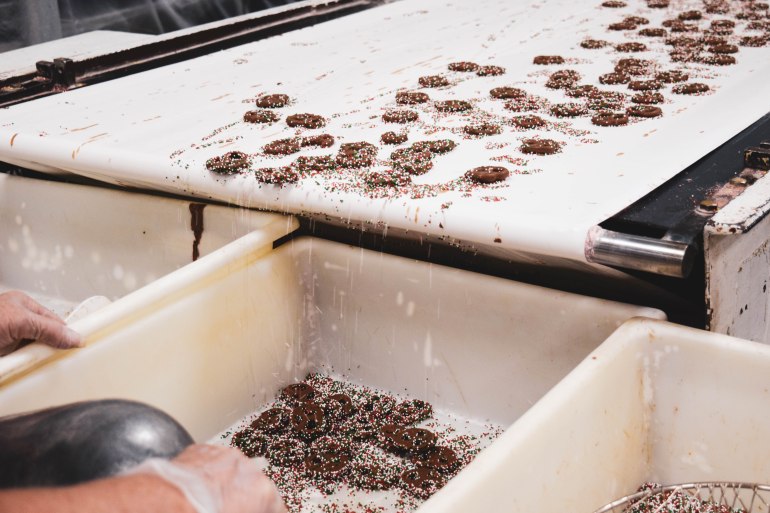 They were then sifted through a basket and placed carefully into a box with a bag inside of it. 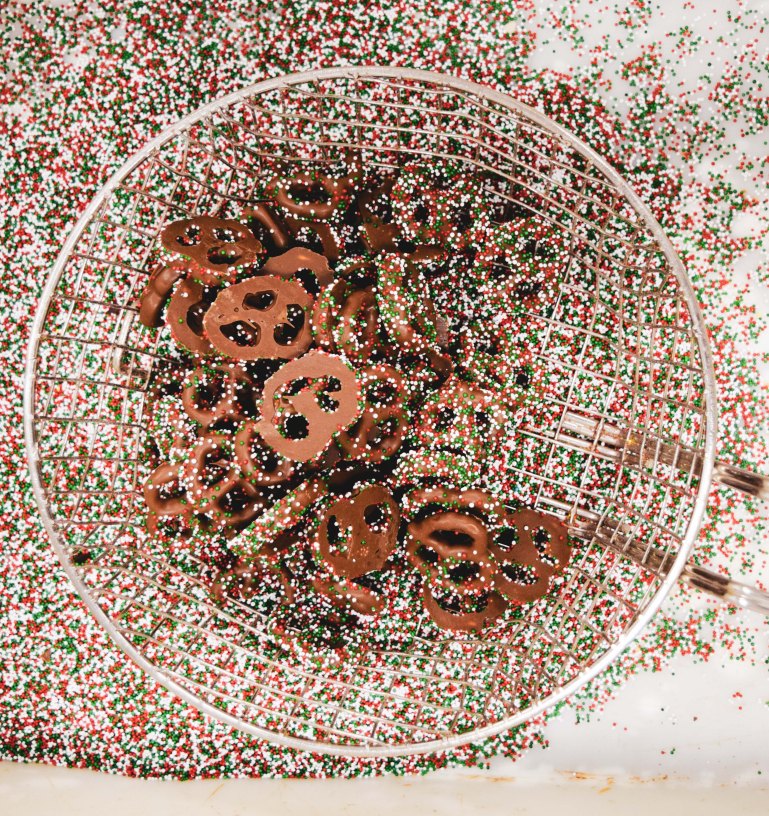 Fran showed us his grandfathers original chocolate melter, which he still had and used on occasion. You could tell through the emotion in his voice that he was proud to still be carrying on his families tradition and using their original machines to do so.

He showed us a few other things around the factory before leaving us back at the store front to have a chat about life and business.

Shirley looked at us and asked if we wanted an ice cream bar, and of course we were all very excited to try some of the chocolate and their homemade ice cream.

I got a cranberry bar, and was surprised with how thick the chocolate coating around the outside was. The ice cream bar weighed almost as much as me! They definitely don’t skimp out on the chocolate, no matter what they are making. 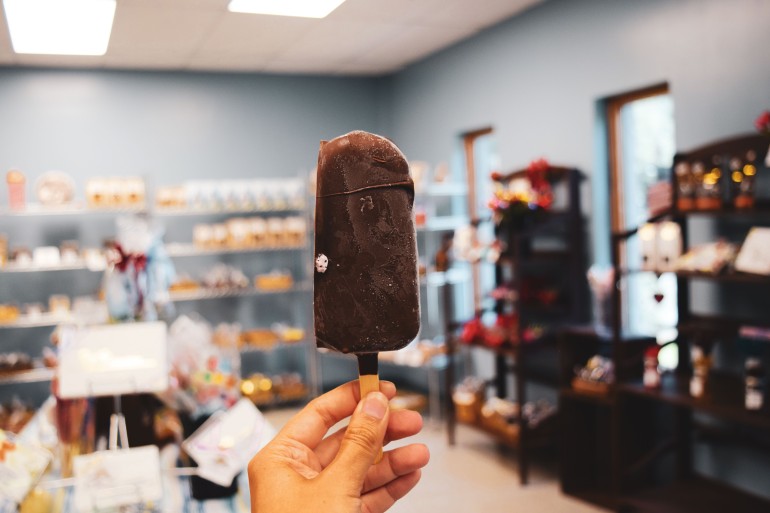 We stayed for a long time just talking with Shirley, Fran and their two sons, sharing funny stories and learning more about the family business. They were such a warm and friendly family, and it was so cool to see people so passionate about carrying on generations of tradition.

We were handed enough bags of candy to need a bag, and one of the sons mentioned that they had recently redesigned the label.

You could tell both sons that we met were smart and excited to revamp the family business with fresh ideas and ways to market the candies. I smiled as he asked Matt if he could put a newly designed sign above our rack at Lees, and Matt said of course. So keep an eye out for the newly designed packing and signs that will be making an appearance soon!

We said our goodbyes and parted ways, entering the sweltering heat and making our way to the store front in Fairhaven. We wanted to check out the customer side of the products, and the store was so cool to see. Shirley mentioned that they had designed the store as a modern version of the original store, with all the wood and copper accents that were found back in the day. 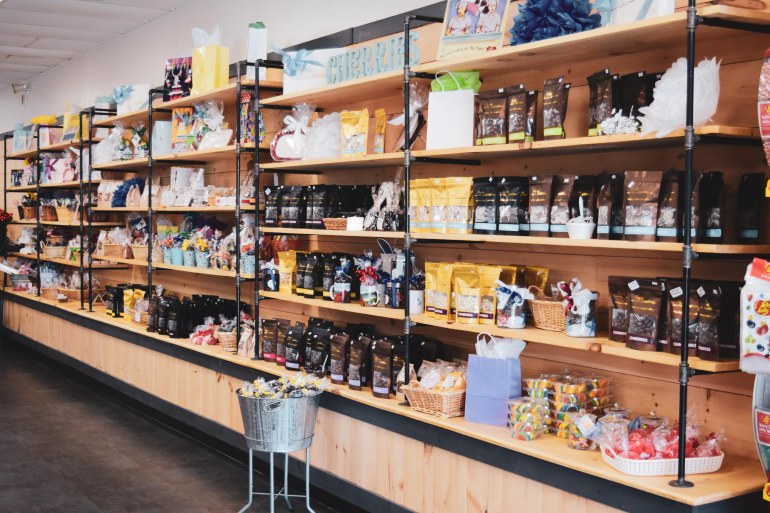 We were greeted warmly at the store and even given free Del’s lemonade (without the straw, because that’s the proper way to eat it), and we were off. It was such a wholesome family experience, and we all felt closer to the family and the candies after the visit.

As we munched on more candy on the ride home, we all couldn’t stop talking about how funny and kind everyone was, and how generous they were with showing us around.

If you ever need chocolate or candy for a gift, special occasion, or just because, we carry so many amazing and delicious family-made Dorothy Cox chocolate right by our registers on a rack. Because who doesn’t love a good treat?

As always, we want you to feel the connection we experience everyday in our line of work. It’s important you know where your food comes from, and choose to support the local businesses who care so deeply for the area we live in.

Until next time, at your favorite local business,