The sun had just risen to share its morning light, and the dew was sticking to the grass when we got to Orr’s Farm in Westport. JD, our Produce Manager; Matt Ponte, my fellow communications coworker, and I pulled up in the rocky driveway to the farm stand. It was the earliest we had ever scheduled a farm feature, and by the stillness of the morning air we could tell it was going to make for some relaxing footage and shots.

JD immediately walked over to shake hands and say hi, as we introduced ourselves to Andrew Orr, who runs the farm, and his father Mike.

They were both such nice people, and had the thickest Massachusetts accents ever.

You could tell that even though it was 8 a.m., they had already been out in the field for some time based on how wet their clothes already were. JD joked that they needed some rain gear to tackle the morning dew, and we set off to pick some shishito peppers.

The first thing we saw was a long crop of sugar cane, and it was certainly a weird crop to see in this part of the States. Andrew grabbed a couple of leaves from the sugar cane and said that a “couple of restaurants we sell to were actually looking to use the sugar cane for drink stirrers”, which was a really cool and unique thing to see.

Right beyond the sugar cane was the peppers, which grew in rows held up by string and were so full of peppers that one bush seemed to hold a hundred little shishitos.

Andrew mentioned that they want to “put netting over ’em in the fall to see if we can get more out of ’em. Last year we had to rush to pick them because there was a chance of frost.”

Almost every farm we’ve been to isn’t shy about how destructive the weather can be to their businesses.

As Andrew started picking, JD immediately bent down next to him and got to work. They picked and tossed the peppers into the box while gossiping about local farmer’s crops and how the growing season went this year. When I bent down to check out the plant, I couldn’t get over just how many peppers grew on one stem alone.

The little plants were loaded with some decent sized peppers in small bunches at a time. 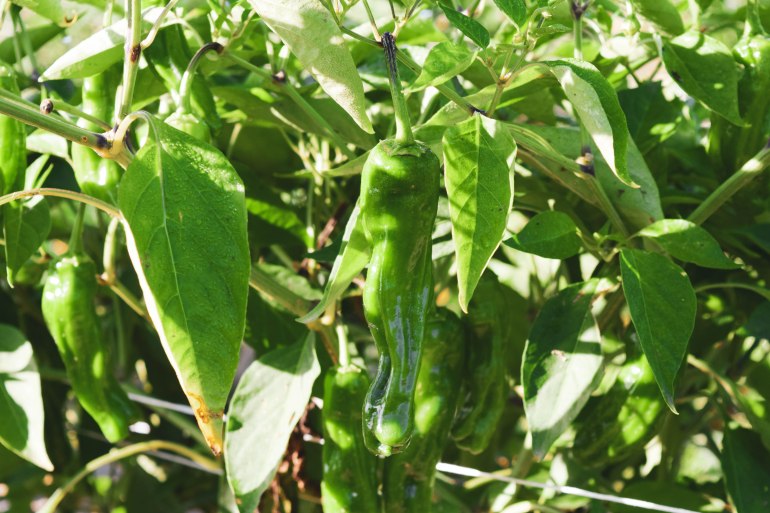 Andrew said that he lost all his help this week. “They all went back to school already, can you believe it?”, and honestly, I wanted to cringe just thinking about how summer was basically already over. Every year it seems to go by faster and faster.

The box filled up quick as they worked down the row, and Andrew joked that “for a little pepper plant, they freakin’ produce these little suckers” and honestly, I couldn’t have said it better myself.

All of us couldn’t help but notice the strangled bird sounds that we kept hearing, and I whispered to Matt joking that it sounded like a bird was dying out in the field. Turns out they had a number of bird sound boxes throughout the fields that mimic prey bird calls to keep the local birds from eating all the crops.

Andrew told us a funny story of when they put the bird boxes in and forgot to change the original setting, and the next day the neighbors called saying it woke them up at 3 in the morning. Andrew chuckled and said he felt so bad because they had completely forgot to change the setting so they didn’t go off at night. But hey, everyone makes mistakes. 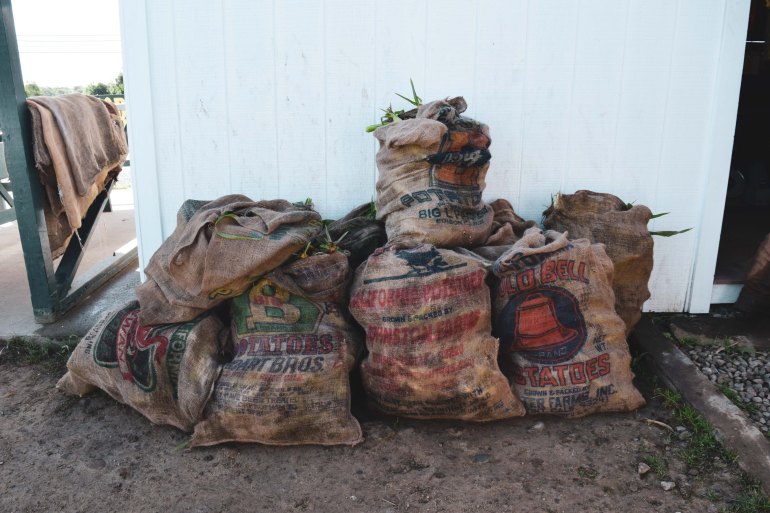 We walked back over to the farm stand to drop the peppers off, and Andrew mentioned that another local farmer, Paul Manchester from Diamond Acre Farm, uses space on the field to grow some crops. It was so cool to see how integral the farming community was to one another, there wasn’t a single farm we went to that didn’t ask how other farmers were doing.

The watermelons we passed by looked so good, and were clearly just picked.

As we made our way to the fingerling potatoes, Andrew showed us the digger that he had bought to make fingerling picking easier, but had turned out to be a nightmare. It had destroyed the skins of the potatoes, and he had lost a lot of crop from it. He smiled and said that if we had any suggestions for modification he would be more than happy to hear them, but I could tell he was determined to figure it out and get to using it again.

As Andrew dug up the potatoes, he talked about how the potatoes are really sensitive to PH and are tougher to grow than people might assume.

I couldn’t help but laugh at the fingerling varieties when Andrew and JD talked about them, with names like Papa Gaucho, Russian Banana, and Australian Crescent, it was hard to take it all seriously.

Andrew mentioned that they had a really lucky time with deer, and didn’t seem to get many in the fields here. He mentioned that Paul, who grew some crops on the field, had “seen a deer” and it had scared Andrew when he told him, so he immediately put up some strobe lights to frighten them off at night. Who knew deer were afraid of a good strobe light party? 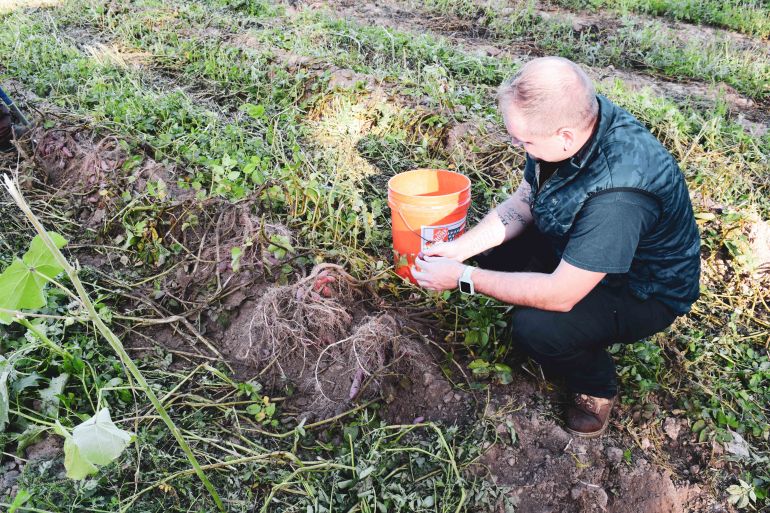 As Andrew was digging, he said my favorite quote from the entire time we were there, “you get in touch with the land doing this stuff”. He said it while wearing soaked clothes from the morning dew and hands coated in potato dirt, with the biggest smile on his face. It was such a simple statement but it said so much about the hard work and reward you could tell he felt from farming the land. 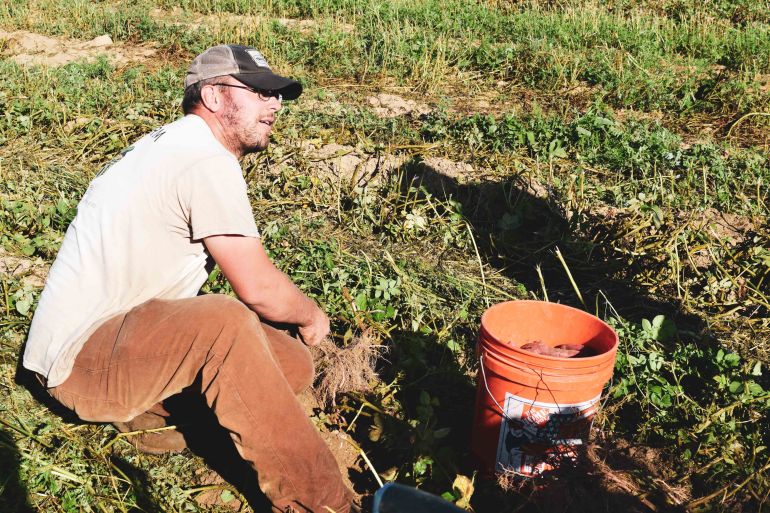 As Andrew and JD picked the potatoes off the roots, Andrew turned to us, potatoes in hand, and told us about their new local farm resident.

“We were picking corn a while back and I almost tripped into a bloody hole, I didn’t know what it was. Come to find out, one day we were out using the tractor and a fox beelined right across and came right towards me, he wasn’t even scared. He went right into the corn where the hole was, and that’s when I knew we had a fox living in there. Then I found chewed up cantaloupe, I had no idea foxes even ate ’em. There was cantaloupe all along the corn here from him.”

He chuckled and turned back to picking, “he’s probably after all the field mice and everything else. I did some research on it, and turns out foxes will eat just about anything”.

Andrew seemed to like the fox, even though it ate some of his crops. It was like free vermin control for the field, and I felt like he had become the Orr’s Farm pet of sorts.

As we walked around the farm to check out the different crops, Andrew carried the heavy bucket of potatoes like it weighed nothing which was pretty impressive. He told us a funny story from a little while ago that I felt like needed it’s own place here:

“I got a planter from down the street that was from the 1800s. It’s got all steel wheels and everything. It’s wild! First time I got it, I grabbed my grease gun out ready to grease it up…” and already JD starts laughing at a joke that goes way over my head…”but there was no such thing as a grease fitting back then,” Andrew says, laughing at his own mistake while JD and Matt laughed along. I just smiled because I know nothing about tractors, but I liked that Andrew could joke about his own mess-ups and get a kick out of them.

We made our way back to the farm stand so Andrew could show us the cleaning process for the potatoes, and already it was starting to feel like fall in New England.

He proceeded to dump them into a giant sink, and said “normally we let these soak overnight but today I’ll just go straight to washing them so you can see the process”.

As he rinsed away, the dirt fell down the drain and the beautiful natural colors of the potatoes came through. They were a really cool and unique red that made them stand out against the normal fingerlings we are used to seeing in the grocery store. That’s what makes local produce so much fun to carry.

As he washed away, Andrew asked if we had tried the orange seedless melons from Walter, who often comes to Lees with local produce. When JD said yeah, Andrew replied with his eyes lit up from excitement, “did you freakin’ crack one of those open? Holy christ!”. And now I feel like I need to find out for myself how good these watermelons taste!

With the potatoes all cleaned and smiles on our faces, we trekked over to the farm stand sign for a photo of Andrew and his father. 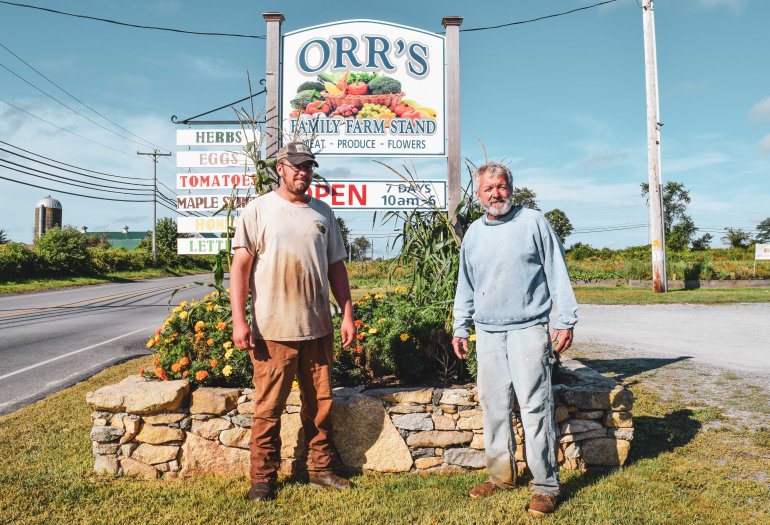 When we finished with the photo, we all shook hands and joked a bit more before heading off. It was so fun to spend time with a farmer who was young, excited, and full of great stories about his experience over the years.

We carry many different Orr’s produce over the seasons, like their amazing shishito peppers which are fantastic on the grill, or their colorful fingerling potatoes that make any roast look extra special (or as Andrew says, make great potato chips). Make sure to pay attention to the little signs above our local produce so you can put a face and story to the name, just like we do on a daily basis.